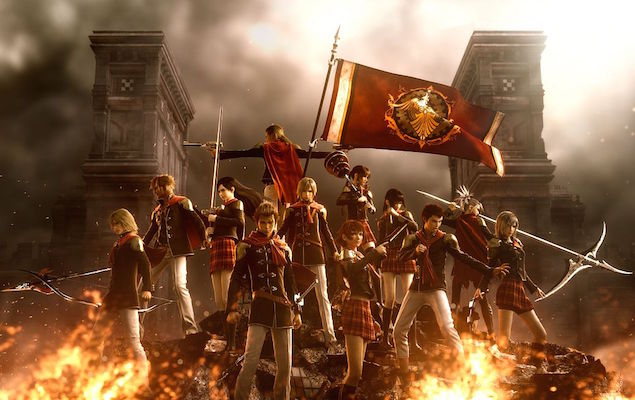 This generation of consoles has seen many high definition remasters of games, from heavy hitters like Grand Theft Auto V to scrappy indie titles like Guacamelee. If you’re playing a game on your Xbox One or Playstation 4 then chances are that you’ve heard of it before, if not experienced it already. Final Fantasy Type-0 HD fits into this category. It’s a remaster of a PlayStation Portable (PSP) game that never made it out of Japan until now. Much like the recent games in the series (except Final Fantasy XIV), its a heady mix of futuristic technology and magic.

The game is set in the world of Orience. Its four kingdoms are at war and you control Class Zero, an elite group of fourteen student soldiers who can wield weapons and magic. Each member is named after a card in a pack such as Ace, Seven, and Jack. After the prologue, you’ll find yourself in an academy that is reminiscent of Hogwarts in the sense that its essentially a school for magic. There’s a definite Harry Potter vibe in the way the game plays out. You’ll spend a fair amount of time honing your skills, making friends with other cadets, and interacting with professors that have a storied past. These segments act as pleasant buffers between missions. 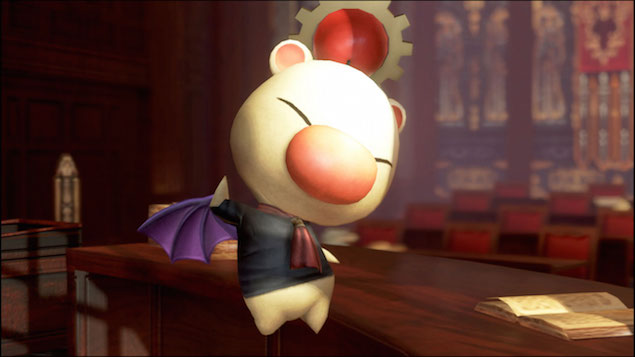 As for the missions themselves, they’re varied. You’ll liberate towns, take down gigantic bosses, and even partake in a few that would be right at home with a real-time strategy game. Before you know it, you’ll find yourself in a comfortable cycle of missions and exploring your the academy and finishing side-quests along the way. The structure is similar to how Persona 3 plays out, though more streamlined. Unlike Persona 3, Final Fantasy Type-0 HD is broken down into distinct chapters. Each chapter has several missions and each mission is broken down into bite-sized segments liberally sprinkled with save points that make it easy to put down without much of a fuss.

When you’re not in a mission, exploration happens on a timer. Every time you speak to a character, complete a side-quest or simply exit to the world map, a few hours of in-game time passes. This gives the game a sense of movement and rushes you through specific areas in order to progress to the next part. It’s a far cry from how most games in the series have usually played out, and it’s an extremely refreshing change. 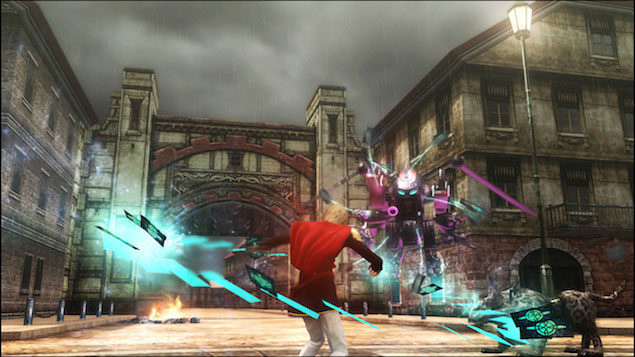 But this isn’t all. Combat is also revamped from earlier Final Fantasy games. Earlier games in the series were known for their turn-base battle system. Here, we’re treated to real-time combat. In each battle, three of your characters will be present, and you can control one of them while the other two are managed by the game’s AI. It’s an approach quite similar to Kingdom Hearts and Final Fantasy VII: Crisis Core. One major difference is if characters gets knocked out in combat you can switch them out for another from your team, and the game ends only if you’ve exhausted all 14 of them. This is another tweak that keeps the momentum up.

There’s a sense of fluidity to the proceedings due to its targetting system which allows you to land attacks on enemies with ease. These aren’t the only reasons for the fast pace of the game. You can pull off moves called break sight and kill sight attacks. The former lets you deal tremendous damage to your foe and the latter as the name implies, kills them instantly. It barely misses a beat and ends up being rather addictive. 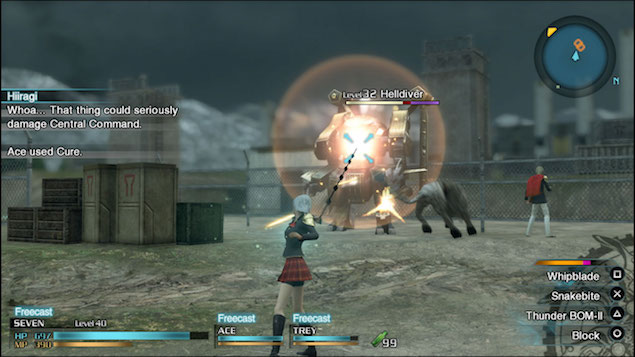 Aside from the series’ favourite option of letting you summon monsters (the presentation of which is as over the top as ever), your characters can also team up for a triad attack, allowing to hit your enemies harder. Fights end up being fast, frantic and entertaining making progression anything but a chore.

Perhaps Final Fantasy Type-0 HD’s biggest strength is its narrative. It’s mature, dark and focuses on the atrocities of war. There’s no hesitation to spill blood and kill off characters. The plot unfolds via documentary styled films and does a fantastic job of keeping your interest piqued. Sadly, this doesn’t extend to the dialogue which is rife with terms such as “l’cie” and “cieth” that are not properly explained. They’re out of place for anyone who hasn’t played Final Fantasy XIII and its sequels. It mars the rest of the game that is quite possibly the most inclusive in the franchise.

When it was announced for the PlayStation 4 and Xbox One, it made waves for being accidentally confirmed for the PlayStation Vita. This forced Square Enix – the company behind the Final Fantasy franchise, to apologise for the gaffe. Some elements of Final Fantasy Type-0 HD make us wish it was on the portable platform instead. For a game with “HD” in the name, it looks surprisingly lacklustre. From blurry character models to small, constricted environments of many of its missions, everything about Final Fantasy Type-0 HD from a visual standpoint seems to indicate it would have been better on a smaller screen. Tragic, given that the franchise is known for stellar graphics. 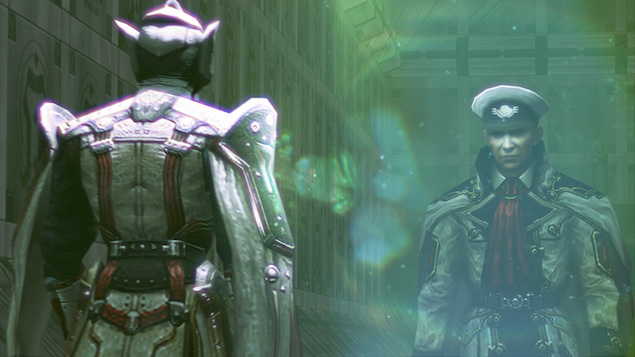 Apart from this, there’s an overdose of loading screens. Every time you enter a new area you’ll find your playtime impeded upon by a loading screen. The last game that was so liberal with making you wait was Hanuman Boy Warrior for the PlayStation 2, which was made on a shoestring budget by an Indian studio in less than a year. While the visuals are a bust, so are its menus. These appear to be carried over wholesale from the PSP version. Given that this is a full priced game, Final Fantasy Type-0 HD’s production values scream of laziness.

All of these issues plague what should have been a solid role-playing game. Its design, combat, and missions are enjoyable but are undermined by the lack of polish and finesse that we’ve come to expect from a game bearing the Final Fantasy name. Having said that, if you do manage to look past Final Fantasy Type-0 HD’s surface flaws, you’re treated to a substantial 30-hour odd campaign that’s entertaining despite of it being better suited to a handheld console. Considering that this is a full priced game however, its shoddy production values makes it tough to recommend to anyone who is not already a fan of the series.

We played a review copy of Final Fantasy Type-0 HD on the PlayStation 4. It’s available the Xbox One as well and retails for Rs. 3,499.