The world of Bloodborne (created by Dark Souls and Demon Souls makers From Software) is a hostile place. Everything in its fictional city of Yharnam – where most of the action in Bloodborne happens – exists with the sole purpose of making your time in it miserable.

From axe wielding madmen to hulking, brutish monstrosities that take great delight in pummelling you to death, there’s very little solace to be had. Even the city’s crows and dogs were dangerous, and waste no time in tearing the bones from our flesh. It is the video game equivalent of having a bad day. The kind of bad day that begins with you losing your wallet, and ends with you getting fired. Along with getting disowned by your family, socially ostracised, and being dumped by your significant other.

Early in the game, we faced hordes of lunatics and beasts that fill up this once decadent city and barely made it by the skin of our teeth. Just when we thought we’d have a moment’s respite, we were pitted against the Cleric Beast, an enormous yet agile shrieking demon complete with horns. It towered over us, swiping and thrashing at every opportunity. This would not end well. 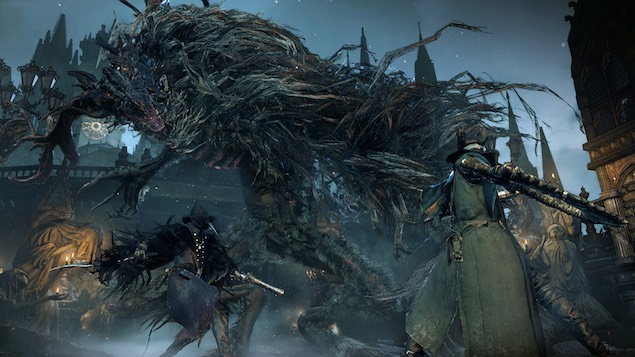 As you could guess, the game is relentless in its approach. The story is minimal, the hints are sparse, enemies are tough as nails, and it doesn’t tell you what to do unlike most modern games. You’ll find yourself dying. A lot. We did. But we kept coming back for more, because the game is always fair. It’s hard, but it’s beatable, and you just need to puzzle out the right strategy in battle.

And as we mentioned in our preview the combat is addictive. The immense difficulty means that the lowest enemies in the food chain capable of killing you if you aren’t careful, and every encounter is a fight for your life. But you will enjoy the rhythm of combat, and each kill feels like an accomplishment.

This is backed up by a few simple rules the game tries to teach you from the start. Firstly, the dodge button is your friend. You see, unlike the developer’s previous games, Bloodborne has no shields (well, baring a single wooden shield that’s useless). You’ll be relying on sidestepping many an attack. Secondly, well-timed shots from your firearm will stun an enemy, allowing you to pull off a critical blow. And if you do get hit by an enemy (and you will), you have a limited window of opportunity to regain some of your health by counter-attacking. 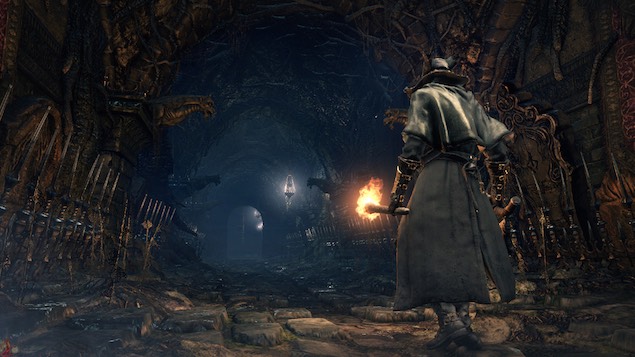 The payoff for paying attention to its rules is visceral and rewarding. Time and again, Bloodborne will pit you against seemingly insurmountable odds such as the Cleric Beast. We managed to defeat it by stunning it with a few hits from our pistol, that allowed us to rip out its skull in a fountain of blood and gore. Try to hack away at the Cleric Beast without thinking through the fight, and you’ll quickly become a slowly spreading bloodstain instead.

But Bloodborne makes combat more fluid than the From Software games that preceded it. The ability to transform your melee weapon into an alternate form makes the combat even more interesting, as each form has its own reach and damage, suiting different roles in a fight. Our favourite weapon is the Kirkhammer. In its normal form it’s a simple sword that lets you perform rapid, short range attacks. With the tap of the L1 button it transforms into a gigantic two-handed hammer that hits further and wider but slower. While the weapons are few in number compared to Demon’s Souls or Dark Souls, their secondary forms allow for greater variety in battle.

Similar to its predecessors, Bloodborne has an online feature that lets you help other players traverse Yharnam, hopefully with less deaths than you had. You can leave notes for them to either guide (or misguide) them on their way. Also, you can enter the game of a friend, to help them defeat some of the game’s tougher challenges – or just square off in combat online if you’re feeling bloodthirsty. You’ll find chalices in the game, and these send you to dungeons complete with bosses, these areas are randomly generated with a variety of traps to avoid, secrets to discover, and abominations to slay.

In addition to this, these chalice dungeons can be shared online and even explored with a friend. For a game that’s already filled to the brim with content, it’s nice to see this mode added for free, at a time when most other enterprising companies would probably cordon this off as paid unlockable content.

Bloodborne gets a lot of things right but it isn’t without faults. Some boss fights are made annoying simply due to the environments they take place in, which can result in a lot of needless deaths. Most notable was our encounter with Father Gascoigne, which takes place in a cemetery. Its cramped layout made it a tougher than usual fight in a game that’s hard enough as it is.

This aside, the loading times are too long. You’ll be dying regularly, and getting back into Yharnam seems to take a lifetime. Sony has announced that it is working on a patch to rectify this, but for now, it serves to irritate. There are some instances where the game slows down. Bloodborne manages to chug along at a solid 30 frames per second in most places, but there are some areas where it drops below that. It’s slight but disconcerting all the same.

Minor annoyances aside, Bloodborne is an intriguing game that will keep you entranced long after the first time you’ve played it. It certainly isn’t for everyone, but it is more approachable than its predecessors, while still delivering that incredible feeling of accomplishing something meaningful with each fight.

If you’re the sort of person who is up for exploring a grim, dark, and fatal world and has a high tolerance for failure, you’ll be right at home in Yharnam. It might be the video game equivalent of an extremely bad day, but it also gives you the means to fight back, making it more fun than it should be.

We played a retail copy of Bloodborne on the PlayStation 4. It retails for Rs.3,999 in stores and Rs. 3,499 digitally.