In recent times, we’ve seen the tablet market overflow with devices claiming to be ‘iPad killers’. Every other tablet just wanted to prove itself to be better than the iPad but while none have been better, only few such as Motorola (Xoom) and Samsung (Galaxy Tab 10.1) can claim to have come anywhere close.
And then there was Sony. It did not claim to be the next iPad killer, rather tried to innovate and come up with something new that would grab the attention of the tablet market. Sony finally launched the Tablet S, with a foldable magazine-like design and the Tablet P, which folds in the centre like Nintendo’s 3DS console. Today we review the PlayStation certified Tablet P and find out if it is worth your time.

Design & Build
On first impressions, the device looked like the Nokia communicator on steroids which isn’t a good thing. The unique clamshell design is what caught our interest. The tablet folds right in the middle supported by two hinges on either side. The exterior is plastic-y with a silver finish that is quite capable of attracting scratches. The advantage of the design is that the screen remains protected at all times. Built solid, the Tablet P feels incredibly light at approximately 372g. The weight is evenly distributed and one won’t feel tired holding it for longer durations.
Once you unfold the device, you get two 5.5-inch screens inches boasting Sony’s TruBlack LCD technology. They however, do act as fingerprint magnets. There’s a notification light that runs at the bottom. It flashes green for mail and social network notifications and changes colour to red to indicate low battery power. 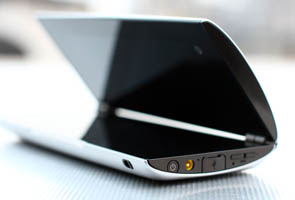 All ports and slots are present on one side. There’s a micro USB port (for data connectivity only) along with a charging port, volume buttons and the power button on the right panel. The device does not charge via the USB port which is disappointing as you have to carry the charger at all times. The headphones jack finds room at the bottom of the device.
The removable plastic sheet reveals the SIM card slot on the top while the battery and microSD slot sit below. The tablet has 1GB of RAM and 4GB of built-in storage. It offers expandable storage upto 32 GB via a microSD card slot. The packaging included an AC adapter, a rechargeable battery pack and a 2GB microSD card.

Display
The dual 5.5′ screens are an absolute delight as far as picture quality is considered. The 1024×480 resolution makes photos and videos appear sharp and crisp and they look really fantastic. The sad part is that you can view them only on the top screen with the bottom screen displays the controls.
This does make sense since it would be annoying to watch videos with the bezel in the centre splitting them into two. But nevertheless, it still isn’t comforting to watch videos crammed into one tiny screen, especially if you’re opting to watch a film. The black bars on either side make it worse because of the narrow aspect ratio. YouTube videos, however, play utilizing both displays, which is a problem in itself, as the split down the middle hampers the visual aesthetics of the video.

Camera Quality
The 5MP auto-focus rear camera shoots sharp pictures as would be expected from a Sony device. Though it still isn’t optimized for a tablet of this stature, Sony has made an effort here. Video mode offers three options: high, low and YouTube. One can shoot videos in 720p, though the quality isn’t that great to rave about. The presence of a flash is highly missed especially under low light conditions. You might want to step out into the open or have a well lit set-up to extract good shots. The camera offers digital zoom up to 8x but that comes at the cost of image quality. The front-facing VGA camera also does a fairly decent job while video chatting.

OS & Interface
The tablet ships with Android 3.2 (Honeycomb). Sony tried to play around a bit with Honeycomb to optimize it for the dual-screen Tablet P and an ICS upgrade is on the cards this year. There are 5 customisable screens. There’s a launcher at the top of the screen with the Google search box and shortcuts to the browser, mail, social feeds and video gallery just next to it. The top right corner houses the Favourites shortcut, listing all your Sony-bought content and recently added pictures and videos as well. The Apps shortcut adjacent to Favourites, opens up into a glossy white display of icons that glisten occasionally.

The lower screen turns into a full-fledged keyboard whenever necessary. Typing with both hands in landscape mode isn’t comfortable at all. You’d be better off typing with one hand and getting work done faster. The portrait mode offers convenience of typing but just feels weird. The device supports flash and the in-house browser does a fine job of running web pages smoothly. The pages loaded rather swiftly on our wireless connection and offered a seamless browsing experience.

Pre-Loaded Software
Most of Google’s apps are already present, though YouTube is not (which is quite strange). Evernote and UStream look like they come preinstalled, instead they are just shortcuts leading to the Android market. Once installed, they worked just fine. There was also a shortcut of HD Gameloft which redirected to their site with a list of games to download for free.
The Social Feed Reader app integrates all your Facebook and Twitter feeds as one consolidated list. If you’d like to keep your feeds separate, you can always pay a visit to the Android market and download the respective apps. Then again, your feeds are displayed on the upper screen and the lower half prompts the keyboard when you want to type. There’s an app called selectApp that enables you to access a website which enlists a range of apps (both paid and free) that are optimized for your tablet. We installed an app called ‘box’ which helps you view, share, store and send all your word documents, excels and pdfs and also collaborate with others online.
Most of the pre-installed apps do make good use of the dual screens. The Gallery app for instance, displays images as thumbnails in the bottom screen while you skim through the images on the top. The Music player app gives an aesthetic view of album art in the bottom screen. To select a new track, just pick the album by tapping it. You can view the tracks as cover art view sorted by album and by artist and also in your library. If you quit the app without turning the music off, a mini version of the player appears as a widget on the home screen.
With the Video player app, videos remain confined only to the top screen with the player controls in the lower half. This is both a good thing and a bad thing. While having controls present at all times can be rather handy, it is disappointing to see the video limited to such a tiny, disproportionate screen.
Another major flaw is that the Android Market app runs only on the upper screen with the lower half remaining absolutely blank. The dual-screen therefore, feels very alien in the Android world.

Performance
Video playback can be split between the two screens or assigned just to the one on top. Since the lower screen stays on the whole time, the battery tends to drain out rather quickly. Despite a 3,080 mAH battery, the maximum you can squeeze out of this beast is about 6 hours and that’s with controlled brightness levels and browsing the web. The device took quite a long time to change orientation from landscape to portrait mode. We kept flipping it around to see if we got it right and that was very frustrating.
Sony’s attempt to modify Android Honeycomb 3.2, has affected the usability of the device. The UI seemed sluggish while dragging icons between screens. The audio of the loudspeaker isn’t that great and this comes as a shocker for a Sony product. You’ll often find yourself reaching for your headphones.
The device works on both 3G and Wi-Fi connectivity. However, at times, it had troubles connecting to the Wi-Fi, though 3G worked just fine. What did impress us was the browser which was very smooth and the fact that apps loaded rather quickly. The tablet is also DLNA compatible to help stream digital content on a much bigger screen. 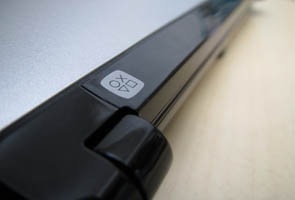 Gaming
A feature that piqued our interest was the ability to play PlayStation 1 games. The build is well suited for games like Crash Bandicoot, which were comfortable to play. The Tegra 2 processor does a great job of handling such games like a piece of cake. Having said that, games that require the use of shoulder buttons might be a bit difficult to play since they are placed on the top display screen.
The good thing is that Sony was smart enough to provide options for an adjustable controller. You can resize and reassign the location of the buttons. Despite this clever tweak, you will miss the actual physical controls as offered in the Xperia Play or the Vita. The Angry Birds experience was very disappointing with the display only on the upper half. Though Fruit Ninja makes use of the dual screen, the division in between makes it difficult to slash targets.

Another huge letdown, especially for Xperia Play owners is that PlayStation games purchased earlier via the Android market for the Xperia Play cannot be installed on the Tablet P. You need to sign in to the device using your PlayStation Network account and pay for the games all over again!

Verdict
Sony’s courage is quite admirable having ventured into the tablet arena with the Tablet P as one of its latest offerings (Tablet S being the other). We weren’t quite sure of whether to appreciate it or discard it altogether. The device doesn’t completely disappoint, but it isn’t the best at what it does. Until Sony, tablets were single-screened to run the Android OS – Reparação de Consolas and that seemed ideal. Experiencing the Android OS on the Tablet P pushed us away from our comfort zone. Though the device has plenty of dedicated apps, the split screens ruin the experience, with the lower screen rendering no use at all for some apps.
Price tagged at a whopping Rs. 37,000, the Tablet P won’t have many buyers, considering the fact that even its sibling the Tablet S costs anywhere between Rs. 30,000-Rs. 34,000. As a comparison, you could buy an iPad 2 3G 16GB for the same price and be left with some change.
If you don’t own a tablet yet and are looking for something different and don’t mind shelling out the money, you can pick this one up. But if you’re a gamer, we’d suggest you wait for the PS Vita instead.
To see more pictures of the Sony Tablet P visit our photo gallery.