Similar to the sudden rise in the number of mobile phone manufacturers a few years ago, tablet makers are raining these days. It seems everyone is making tablets or just importing a few from China and pasting their stickers.

One such company that appeared along with the recent tablet tide was Noida-based Zync, which has launched various tablets in different segments in a very short period of time. The company recently released its Z999 Plus tablet in the country with voice-calling and Ice Cream Sandwich. We put it through the paces to find out if it offers any value or is just a part of the herd.

We have seen over the last few months that despite being inexpensive, some tablets do have decent looks, the Micromax Funbook and Zen Ultratab A100, for example. So, being in-expensive is not an excuse to compromise on design.

Z999 Plus features an all plastic rectangular design with slight curves on the back at the corners. The build quality is solid and will not give you any problem.

Talking about the specifics, there’s power button and volume rocker on the right, while the bottom is full with different ports including 3.5mm audio jack, mini-HDMI out and MicroUSB port. The SIM card slot is present on the left side.

Display
Zync has opted for a 7-inch capacitive touch panel in Z999 Plus, which sports a 800x480p resolution. Similar to other budget tablets, there is hardly anything exceptional here.

The display is just average and viewing angles are bad. You will have to look at the tablet head-on; else you will miss half the things. The under-sun visibility is also a big let-down, however the display is quite bright for indoor use and colour reproduction is also average.

The touch sensitivity is decent and a basic user will not have any issues. But considering the price of the tablet, we expect that company should have gone for a better display panel with higher resolution. 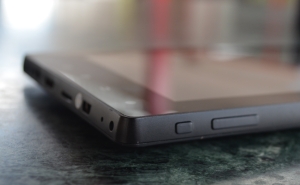 Software/ Interface
The release of Ice Cream Sandwich has been a boon for budget tablets. The manufacturers now have a tablet optimised operating system at their disposal, which works quite decently with nominal hardware. Z999 Plus also comes with Android 4.0.3 on-board. Similar to almost every budget tablet in the market right now, it has a stock interface, although Zync has pre-installed a few apps.

As the tablet comes with 800x480p WVGA resolution display, which Zync does seem to have properly optimised, is not ideal for an Ice Cream Sandwich tablet interface. You would occasionally find text overlapping and the most prominent one is present in the notification bar, where the time overlaps other details like date.

Interface isn’t exactly butter smooth and there is lag while switching between apps, going through home-screens or doing other tasks. The 512MB RAM is to blame for the hiccups and lag, that’s why most of the modern Android tablets come with at-least 1GB RAM.

If you can ignore these lags, the tablet is capable. It played almost all the casual games perfectly fine during out testing. Media playback was also decent.

Zync Z999 Plus also supports the Google Play Store; you can download lakhs of applications and other content directly from Google.

Camera
Zync has put in a VGA front camera and a 2MP rear camera. While the VGA front camera is pretty normal, don’t expect any earth shattering results. As the tablet comes pre-loaded with Skype, you can use this for video calling.

Similarly, the rear 2MP camera is also pretty basic and can only be used for odd photos in a crunch situation. 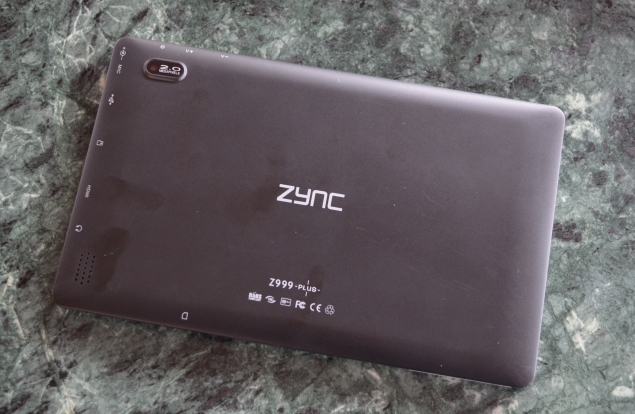 Performance
As we noted in the software section, although the tablet is laggy at-times, it does fulfil the basic computing needs. Be it the media playback, or casual gaming or even working on Office files, the experience is quite decent, thanks to the presence of Ice Cream Sandwich.

The web-browsing experience is mediocre and you will find the tablet lagging on image heavy webpages.

The device comes with a 4200 mAh battery, which offers about a day’s battery backup on moderate use. However, if you are planning to watch videos, don’t expect the tablet to last more than 4-5 hours.

In terms of the connectivity, the tablet comes with Bluetooth, Wi-Fi and 3G support, all of which work quite decently.

Verdict
Our hunt for a quality budget tablet is still on and Zync Z999 Plus is not the one. Though it does offer quite few decent features including voice-calling and in-built 3G connectivity, the poor display and laggy software experience are big let downs. Despite being priced at Rs. 11,990, the overall experience of the device is very similar to the tablets that buyers can get for Rs. 7,000 to 9,000 with just a SIM slot as an incentive.

However, if you really want a tablet with voice calling and 3G connectivity and have a fixed budget, then you can consider investing in the Zync Z999 Plus.