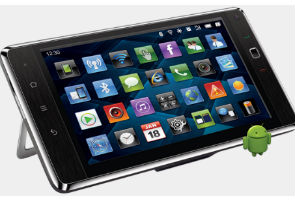 With the pricey iPad still at top spot, tablets have yet to acquire the kind of mass market appeal that the mobile phone does in India. This seems to be possible only if companies manage to break the Rs. 10000 price barrier. After Reliance broke ground with a Rs 13,000 tablet, Beetel has boldly gone where no tablet-maker has been before with a tablet that costs Rs. 9999. But is it worth buying or are you better off saving up for the iPad?

Packaging and content:
The packaging of the device reminded us of our first Beetel landline phone – a slightly jazzed up yet simple box. The box houses the tablet along with the battery, one USB data cable, charger and user manual.

Hardware and styling:
For a 7-inch tablet that costs Rs. 9999, expectations aren’t very high. At the very least, we’d like a responsive, averagely built but well performing Android device, like the Reliance tab.
The device is really heavy and the build quality feels good. The trade-off is its weight and the width is a bit more than we’d like. The styling of the device is pretty decent too with a black matte finish in the front with a chrome strip bordering the screen. The rear of the device has a brown border with a steel kickstand and battery cover. While the device doesn’t look that bad, it doesn’t feel that great either.
The buttons seem like they are all over the place. To the left of the screen, we have the standard home, menu and back buttons. To the right we have the receive/end call button and a trackpad. The left panel houses the volume rocker, the top – the power button and the headphones jack. The bottom of the device has the SD card slot. The right has the micro USB port and the charging port. The biggest disadvantage here is that the device cannot be charged via the micro USB port.
The rear of the device also houses a stylus. Yes, that’s right. The screen is resistive and the stylus is really tiny and can easily get misplaced. The kickstand is a nice addition as the device can rest on a table enabling ease of use.

Interface:
The Beetel Magiq runs on Android 2.2 and like most devices is skinned heavily. We were much happier running LauncherPro on the device but the bundled skin isn’t too bad. Rather than giving you the option of 6 or 7 home screens, the entire interface is divided into tabs such as home, web, entertainment, communication and favourites.
Although you can put any widget on any screen, it’s nice to have the option of grouping them under preselected heads. The heads however remain fixed and cannot be customized.
The standard dropdown menu too has been modified. There is a bar that rests on the top of the screen and gives you information about the Bluetooth, brightness, Wi-Fi and battery. There is also an information dropdown that gives you the notifications and the running tasks. You can easily close running tasks from the task bar, which is a nice option, and you don’t need a third party app to kill running tasks. The rest of the interface such as the applications, settings et al are standard Android.
The on screen keyboard on the device too is a bit tedious to use, especially with the stylus. If you are used to the capacitive touch screen of your smartphone or are generally uncomfortable using a stylus, then typing on the device is really frustrating.

Multimedia:
The multimedia experience on the Beetel Magiq tab is very similar to the experience on any Android 2.2 smartphone with the only difference being the screen size. You get the stock Android music and video player.
The video player lists all the videos on your device in a chronological order for you to play. It’s that simple. The audio player on the other hand segregates your music on the basis of artist, albums, songs, playlist and now playing. You also have the option to shuffle, repeat and add songs to your playlist. The look and feel of the player is similar to that of an Android smartphone and does nothing to take advantage of the larger screen. The audio output produced from the speakers is loud but the quality is shrill. You’d do better to use headphones.
The 7-inch screen in a WVGA display with a resolution of 800 x 480 and for the most part gets the job done. For a 10k tablet the display is good. Just don’t expect the colours to be too vibrant. The brightness is decent although the screen doesn’t look great when exposed to sunlight. Indoors, the brightness of the screen performs well.
Out of the box, the device doesn’t support flash but you can download Adobe flash from the Android Marketplace.
The device has a 2MP front and rear-facing camera but lacks a flash. The camera app again is standard Android and the images produced aren’t that great. The location of the front facing camera is a bit odd and takes some getting used to. The kickstand is a pretty advantageous feature if you want to use the device to watch movies or listen to music on a long train or airplane journey.

PC Sync and market:
This is one area where the device performs extremely well. PC sync, as with all Android devices, is quite painless courtesy Google Contacts. Syncing your contacts is as easy as logging into you Gmail account and letting the device do the rest.
As far as Android Market goes, you have the option to choose from a large library of apps. Some 300,000 apps are at your disposal so be rest assured you will be playing around with the device for a long time.

Essential Apps:
The Beetel Magiq tablet comes preloaded with its own skin taking away the raw Android experience. This isn’t necessarily a bad thing but it does make the device a bit sluggish. We recommend you download LauncherPro as it makes the interface a lot snappier. You could also try any other third party skin but we found LauncherPro to be very effective.
Since the tablet boasts of 3G connectivity, we recommend you download a 3G management app. This app should help you monitor your 3G consumption and save you from getting overcharged or crossing your data limit.

Performance:
Lets’ face it – this isn’t the best tablet that money can buy but for those of you looking for a 10k tablet, this is a good place to start. In terms of hardware specs, the device has a 7-inch WVGA screen with a resolution of 800 x 480. It has 8GB internal memory expandable up to 16GB via micro SD card and a 1GHz processor. It has a 2200mAh battery, which is pretty decent for the tablet but less when compared to the 3400mAh battery of the Reliance tab.
On the downside, the tablet didn’t perform very well on our benchmark tests. Quadrant refused to run and kept crashing. Another disappointing feature is the keyboard. It was annoying to type on especially since we needed to use a stylus.

Verdict:
The device is a complete mixed bag. It is quite good as a sub 10k tablet but is frustrating in terms of the resistive touchscreen and button placement. It is difficult to recommend the Beetel Magiq tab keeping in mind the competition. But if you are truly interested we’d say get some hands on time with the device and its competitors at your local electronic store. As a sub 10k device it is a great attempt but ultimately a lacklustre product.

Pros:
Good build
Kick stand is a nice touch
A decent product for the price
Cons:
Resistive screen takes some getting used to
Skin makes the device sluggish
Battery could have been better
Placement of the buttons too scattered