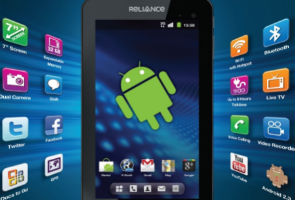 There seems to be no end in sight for the Tablet frenzy. After the iPad 2 and the Android Honeycomb armada, here is Reliance’s latest 7-inch, 3G tablet which runs Android 2.3 Gingerbread and comes bundled with a multitude of 3G plans. At the outset we have to say that for a change this one does not follow the monotonous similarity of all the other Android tablets. Lets see if this one breaks the ice with the Indian masses.

Packaging and Content
Reliance gives us the standard set of goodies including the power cable, the USB cable, the 4-gigabyte memory card and also a pair of super-cheap headphones. But yes, headphones. Apple, are you reading this? If Reliance can, so can you – give us headphones with the iPad!

Hardware and Styling
At Rs 12,999, this is not the cheap Chinese built tablet one would expect. Even though its clearly ‘made in China’ courtesy ZTE, its at the higher end of the spectrum. With its brushed aluminum like plastic finish in the rear, the device indisputably feels well built. Interestingly, the rear casing is removable which means we can access the 3400 mAh battery, alongside the Reliance sim-card slot and the MicroSD memory-card slot. We also get the 2-megapixel camera in the rear end of the device.
The front-end of the device welcomes us with 7-inch capacitive touch display along with the three Android touch buttons and the VGA front camera, which facilitates video chats.
On the right hand side, we get the customary volume rocker and the unusually placed power button which has clearly borrowed from Samsung. Actually, the Reliance 3G tablet can easily be mistaken for the original 7-inch Samsung Galaxy Tab, the only difference being the finish in the rear.
On the top, we get the standard 3.5 mm audio jack and the bottom houses the micro-USB port. Besides these both the top and bottom have a speaker modules.

Interface
We get impression that this tablet was designed more as a means to promote Reliance’s 3G network. The only way that is going to happen is if the users have a decent interface at their disposal, and stock Android pretty much offers exactly that. Unfortunately, someone at Reliance thought that they could out-do Google and build a better user interface. Bad idea guys, even premier smartphone manufactures like Samsung and HTC haven’t come up with anything better than vanilla Android.
The moment we powered the device up we were at the mercy of the unwholesome Android skin Reliance has specially developed for it.
Funnily, for the first 15 minutes we were wondering if the device had a resistive display or a capacitive one, which was Reliance’s claim. After struggling with a below par touchscreen response we lost patience and decided to install LauncherPro which is the best third party Android skin available. The moment LauncherPro was ready the tablet became a pleasant device to use.
Apparently, the Reliance skin was consuming so much of processing power from the device that it was left almost unusable for any other task.
If you have been reading our reviews, you will know we are not big fans of Android skinning, even from companies like HTC who deliver the very good HTC Sense UI, and here’s why.
Android skinning never works, as the best Android is the one delivered by Google – it is fast, smooth and intuitive. Skinning slows down the device, it clutters the user interface and rarely adds any functionality that stock Android does not have.
This is a direct indictment of the Android ecosystem where OEMs have the license to pollute the software and pass on any bloat-ware to the consumer in the name of differentiations and marketing. Hopefully, this will change in the near future.
Lets be clear out here – we are not saying that the 3G tablet is a bad device, actually the reality is quite the opposite. What we hate is Reliance’s decision to pollute the OS with their skin just for the sake of pushing the Reliance brand. Make no mistake, that’s what it is. They may claim that their user interface is unique but it is not. It does not add even one bit of functionality to the device that is not already available on stock Android.

Multimedia
Multimedia is normally a tablet device’s forte as the tablet form-factor is optimized for multimedia consumption. The Reliance tab is designed for this purpose only.
As the device runs on Android 2.3 Gingerbread it is as adept as any other Android smartphone on the market when it comes down to multimedia.Admittedly, it tends to get a tad slow but hey, it costs Rs 12,999. That price won’t get you any dual core goodies and we don’t think many will care, either.
For music we get the stock Android music player. Despite the lack of the visual flamboyance of an iTunes-style cover flow interface, it’s very functional and easy to understand. It organizes one’s music pretty neatly. One can easily sort out assorted music according to Artists, Albums, and Genre or even according to the song name. A built-in equalizer would have been great, but, again, the price bracket doesn’t allow.
Oh well. We’re probably suffering from the Samsung Galaxy Tab blues, which is higher up on the tablet food chain.
For video, we have the standard Android Video player, and also a myriad of free alternatives making the rounds of Android Market. The video player is a pretty barebones experience. No HD video playback, which is a bummer, but HD video playback does require at least an 1GHz processor. Besides this, the device handled most of the standard video formats pretty well, though one would do well to shut down all apps before starting a video.
We should also mention that the display does not boast of a very high resolution and can look bland at times.
Reliance did not mention the exact resolution of the display but we are assuming it to be below 1024×600.
Reliance has added dual cameras – a 2-megapixel snapper in the rear and a VGA resolution one for video chats. Our summation was not very good. They produce some disastrous pictures filled with noise, grain, poor colour and so on. We can actually write a whole other article just on the cons of the cameras. To tell the truth, a 2004 Sony Ericsson S700i could click better pictures. But yes, you will at least get the bragging rights and the VGA front camera will be more than adequate for video chats. We are guessing Skype will come in handy.

PC Sync and Market
This is one area where the device excels. PC sync as with all Android devices is quite painless courtesy Google Contacts. The moment we popped open the Reliance tab we logged into our Gmail ID and eureka! we had all our contacts.
As far as Android Market goes, we do get a wholesome selection of apps to choose from, as this is an Android 2.3 Gingerbread device. Some 300,000 apps are at our disposal so be rest assured you will be playing around with the device for a long time.

Essential Apps
While Reliance added its skin on the Android interface, they thankfully did not install any bloat-ware on the device. The device could hardly stand on its feet with the Reliance skin, with multiple apps it would have been dead on arrival. In spite of this, we do see some Reliance apps such the Rworld which is basically an app linked to their network services and Reliance Mobile TV. The Mobile TV app is basically a spin-off of the one for the iOS. We must say this is quite a handy app as it streams most of the major TV channels on subscription. The streaming quality is pretty good and utilizes the Reliance 3G connection to its fullest. Reliance must be hoping for such services to catch the fancy of the middle-class as they unlikely to make much money on the device itself because of low margins. The one place they can cash in is on their 3G network, and basically they are hoping that the 3G Tablet will act as a catalyst for the 3G market, still at a nascent stage and riddled by poor connectivity and expensive data charges.

Performance
Lets be clear – this isn’t the fastest tablet around. Reliance also claims this device features 512MB of RAM but they don’t mention clock speed or the processor type. We believe it is a processor from the ARM cortex A8 family clocked at 800 MHz which is more than adequate for day-to-day tasks, though we must admit it’s not ideal for multi-tasking.
The device was pretty snappy once we got rid of the Reliance embellishments, but we ran our standard tests to make sure.
So we started with Quadrant and guess what, it crashed. The same happened with Linpack and Benchmark Pi. This was pretty disappointing, but we are assuming this happened because the processor was not supported by the benchmarks.
The only test we managed to run successfully was the web-based Rightware Browsermark test. The results were not very encouraging with a paltry score of 15646. In real-world testing, things were quite different as web pages rendered quickly and we did not encounter many flash problems. Suffice to say we were more than satisfied with the performance.
When it came down to battery life the device lasted around 6 hours, which included constant 3G usage, some phone calls and multimedia consumption. This was quite impressive considering the battery in question is a 3400 mAh.
Another noteworthy mention is the loudspeaker, which handled duties while we used the device as a phone and it also came in handy when we listened to some music. It was loud and clear most of the time. Normally, Chinese tablet manufactures employ their cost cutting tactics in areas such as this but,thankfully, the Reliance 3G tablet does not suffer from this syndrome.

Verdict
There is a lot to like about the Reliance 3G tablet including decent build quality and a fairly functional feature set. Once we couple these features and the Rs 12,999 starting price tag with the myriad of 3G plans the offer becomes tastier. Clearl,y this device is not meant to be a workhorse. As a multimedia consumption hub the device fits the bill perfectly.
One has to admit the Reliance Tab has the potential to open up the 3G market in the country.