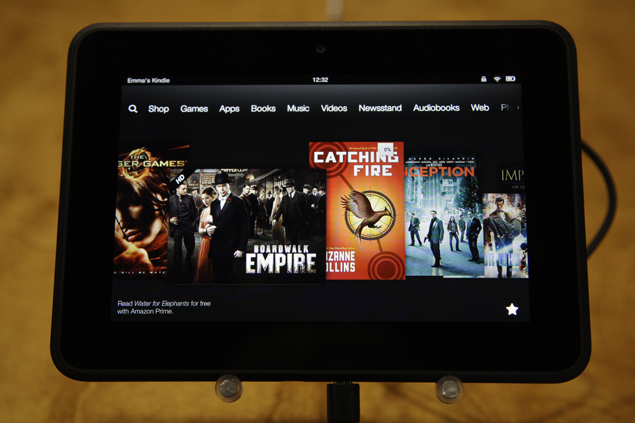 Amazon’s new Kindle Fire HD boasts a much more vibrant screen than the original tablet that came out about a year ago. That makes buying movies and TV shows to watch on the device a lot more appealing.

The screen is such a major improvement that I can’t see why you would purchase the upgraded non-HD older model, even if it means saving $40. The new offering brings the new Kindle Fire HD into closer competition with Apple’s market-leading iPad, which introduced a higher resolution screen earlier this year.

By the numbers, the difference between screens on the new and older model doesn’t seem that big. The smaller Kindle Fire HD, with a screen measuring 7 inches diagonally has a screen resolution of 1280 x 800. Last year’s 7-inch model, and the upgraded version with better innards unveiled Thursday, has a screen with 1024 x 600 pixels.

That doesn’t come close to the latest iPad, which has a resolution of 2048 x 1536. Nonetheless, this upgrade feels like a big leap for Amazon. It means not seeing any of those annoying pixels, a welcome relief that feels even better when you consider the price. At $199, versus $499 for the latest iPad, I can see this being a popular stocking stuffer this Christmas.

Amazon has also made a couple of important design changes in its new HD models. For one, the speakers are now on both sides of the device when held in landscape mode, meaning you can watch movies in Dolby Digital Plus stereo sound without headphones. The old Kindle Fire had stereo speakers off to one side when held this way, and that hasn’t changed with the upgraded version that now costs $159. 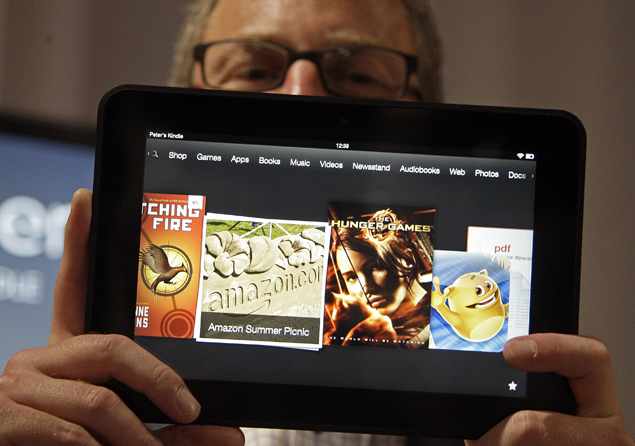 Both the upgraded Kindle Fire and new HD 7-inch models also come with a full suite of new features that are nifty but not game-changing.

Both devices will feature the “X-Ray” series of features that provide insights into the book or movie you’re enjoying.

An on-screen tap during a movie will list actors in the scene, with more clicks, you can learn more about them from Amazon’s movie information service IMDb. In books, X-Ray has been a popular feature on the Kindle Touch that now works on Kindle Fire. It gives you a bird’s eye view of where characters or ideas appear later on in a book.

Amazon.com Inc. has also upgraded its audio book offerings. “Immersion Reading” allows you to read a book while hearing narration from a famous actor. I find this feature to be a distraction, but some book lovers will appreciate it.

For parents, Amazon has added a system that can control how much time a child can spend on various media. So, you could limit how much your kids can watch video and play games, but let them read as much as they want.

Some aspects about the Kindle Fire HD sounded great but weren’t testable in the short time that Amazon gave reporters to try out the devices Thursday.

For instance, it was impossible to tell whether Kindle Fire HD’s two antennas made its performance in Wi-Fi noticeably faster than the latest iPad or Google’s Nexus 7. Or whether its 11-hour battery life held up for real.

In handling the device, though, I found that video played well and images looked sharp. But it was not as responsive as I would have liked. It seemed to lag when swiping through pictures or through the news feed on the custom-built Facebook app.

There was no app that independently controlled the front-facing camera, which is new to the Kindle Fire HD. The Facebook picture I took with the device turned out upside down, even though the camera was clearly meant to be at the top of the device when held in landscape mode. Amazon’s representatives said the camera was mainly for use with a Skype app made for the device.

If I were looking to buy a new tablet, I might be able overlook these minor annoyances because of the sharper screen.

Ultimately, the decision to buy a Kindle Fire HD could be determined by the array of content that comes with the device if you join the $79 annual free-shipping program known as Amazon Prime.

Amazon has made plenty of big investments lately that make Prime a more compelling offer. On Tuesday, it announced a deal with the Epix pay TV channel that allows Prime members to watch 2,000 movies like “The Avengers” and “The Hunger Games” for free, on top of some 23,000 movies and TV shows it had already.

Prime members can also “borrow” books from the Kindle Owners Lending Library, including all seven “Harry Potter” books, for no extra charge.

Backstage at Thursday’s news conference, CEO Jeff Bezos said in an interview that the company has been investing hundreds of millions of dollars in digital content for Amazon Prime.

“Licensing ‘Harry Potter’? Not inexpensive,” he said with a belly laugh.

It’s that kind of investment in content, paired with a device that can show video in HD, that I think could open a lot of wallets this holiday season.