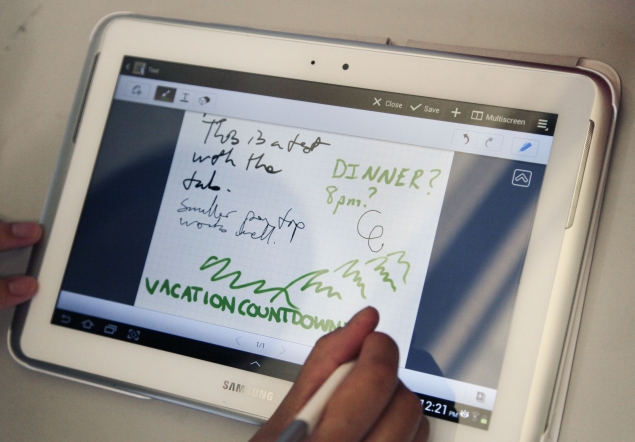 The used tablet-computer market is like guerrilla warfare. One huge army – Apple – dominates the land, while a ragtag group of insurgents keeps raiding and probing, hoping to find some opening it can exploit.

With Samsung’s new Galaxy Note 10.1, the rebels have scored a small victory. It’s a tablet that does something that the iPad doesn’t do, and it does it well. This victory won’t win the war, though.

Available in the U.S. starting Thursday, the $499 tablet comes with a pen, or more precisely, a stylus. It doesn’t leave marks on paper, but the tablet’s screen responds to it. I found it a pleasure to use: It’s precise and responsive, and it glides easily across the screen.

There are styluses available for the iPad, but they’re not very good. The iPad’s screen can’t sense sharp objects, so any stylus has to be fairly blunt. Many of them have rubber tips, which resist being dragged across the screen. 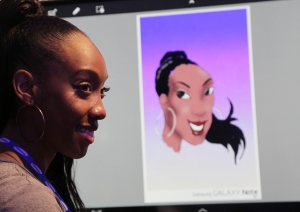 The Galaxy Note has an additional layer in its screen, tuned to sense special, sharp-pointed pens through magnetism.

The Note is not the first iPad competitor to work with a stylus.

The HTC Flyer came out last year with the same ability, but several missteps limited its appeal. First, it was half the size of the iPad yet cost just as much, and that was without the pen. Second, there was no slot for the pen in the body of the tablet, making it easy to lose. The pen also was expensive, costing $80 to replace.

Samsung then built pen-sensitivity into the first Galaxy Note, a smartphone launched early this year. Though well-received, the tablet had an odd size, with a 5-inch screen. That makes it very big for smartphone but small for a tablet. With the Galaxy Note 10.1, Samsung is taking the pen squarely into iPad territory. 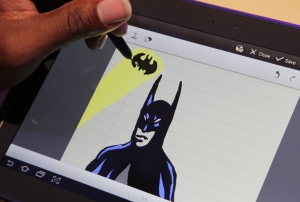 So what can you do with the pen? Well, this is where the Samsung offensive starts faltering. There just isn’t that much the pen is useful for, because stylus-equipped tablets are so new.

You can jot down notes, or edit photos in an included version of Photoshop. You can scrawl personal notes to people and email them. Instead of using the on-screen keyboard, you can use handwriting and let the tablet interpret it. You can even enter Web addresses this way. Handwriting is slower than typing, and the tablet’s interpretation introduces errors, so it’s not clear why you’d use it much, though.

The stylus senses how hard you press into the screen. Samsung’s S Note app responds by making the line you make thinner or thicker, an essential feature for anyone who wants to use a tablet for serious drawing. The pen also comes with a side button that works much like the left mouse button, giving access to extra features with little effort.

Very few third-party apps are designed with styluses in mind, but some of them work better with a stylus anyway. “Draw Something,” a drawing game, is a good example. It’s designed for use with fingers, but the stylus makes it much easier to draw intelligible pictures, because it’s easier to see what you’re drawing. By contrast, a finger is so big and blunt that it obscures the picture. The app would work even better if it sensed the pen pressure.

At the current level of software support, the stylus is just slightly better than a gimmick.

But even when there are more apps for it, the stylus is going to have limited appeal. It’s a must-have for only a small group of people, who like to doodle or need to do so for their jobs. For the rest of us, it will be a fun thing we use once in a while. It can and should tip a purchase decision now and then, but not for everyone.

You can contrast that with the signature feature of the latest iPad: the ultra-high resolution screen. That’s not a must-have feature for everyone either, but it’s immediately useful to everyone.

The Galaxy Note does chip at the iPad’s defenses with other features the Apple tablet lacks. One is a slot for microSD memory cards, which means you can expand the memory of the Galaxy Note inexpensively. That’s very welcome.

The other feature is an infra-red light, which can be used in place of a remote at the home entertainment center. This is a feature Sony pioneered in its Android tablets. It’s welcome, too – some people spend hundreds of dollars on universal remotes, which the Galaxy Note effectively replaces with this feature. However, the included software didn’t work well with my TV and stereo, so this will take some tinkering to get right. 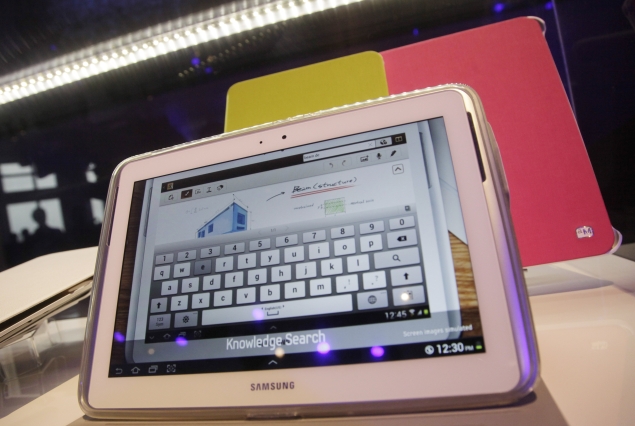 Compared with other tablets that run Google’s Android software, you’re not giving much up by getting a Galaxy Note. Samsung’s quoted battery life of nine hours is somewhat shorter than equivalent models, possibly because of the pen-sensing layer or the new processor.

The Note runs Ice Cream Sandwich, the next-to-latest version of Android, and can be upgraded to Jelly Bean, the latest. It has a fast processor and a big screen. At $499, it costs $100 more than the pen-less Galaxy Tab 2 10.1, which has the same size screen but a slower processor.

The Asus Transformer series of tablets takes another tack: They’re built to work with an accessory keyboard, which also contains an extra battery and more connection ports. That’s another way a competitor tries to take advantage of a blind spot for Apple and the iPad, for which physical keyboards seem like an afterthought.

Together, Asus and Samsung’s strategies could add up to a very attractive tablet indeed. For now, and for most people, the iPad is still the better buy. The main reason is that there’s much more, and better, third-party software available for it.

But the Galaxy Note shows that the pressure is building on the iPad, and Apple will have to work if it wants to maintain its lead.