When the Asus Transformer Prime hit our desk, it was like Christmas, Diwali, New Years and all our respective birthdays had arrived at the same time. If that doesn’t tell you how eager we were to get our grubby mits on this tablet, we don’t know what will. The Transformer Prime was launched earlier on in parts of the world, but India is finally catching up with the tablet. We got one in our hands and we put it through its paces and here are our observations.

Hardware
The Transformer Prime created waves across the ‘tabletverse’ when it was announced. Powered by the Nvidia Tegra 3 quad-core chip, the device is the only quad core tablet in the market. Another noteworthy addition to the hardware list is the new Super IPS display under a Gorilla Glass panel. The screen acts not only as a major fingerprint magnet, but is also highly reflective, meaning it has a major glare problem. This is where the Super IPS display comes in. Once enabled, the screen’s brightness changes to levels where the reflections are completely drowned by the display, without hurting the eyes.

The Indian market will only see the 64 GB variant hitting its shores, with the additional keyboard dock bundled into the package. The dock in itself is quite an impressive piece of hardware, doubling up as an extended battery as well. It has one USB port on the right side along with an SD card slot. The left side houses the charging port.

While the keyboard is totally functional, it is a little cramped for our liking. We found ourselves often hitting the up-arrow key instead of the shift key, leading to several typos. It took a little getting used to, but once we were familiar with the placement of the keys, we felt it would be a good idea to type up the entire review on the tablet itself. The keyboard is accompanied by a trackpad that comes with right and left click buttons and supports multi-touch.

One of the best experiences we had while using the Transformer Prime with the supplied dock was the ability to utilize commonly used shortcuts such as Alt+Tab for switching from one application to the next. The ability to use common keyboard shortcuts made us feel right at home and could definitely work in Asus’s favor. Using the dock turns the Prime into a full-fledged Netbook with an immense battery life.

The USB port is something to be highlighted here. In the past, whenever tablets that have featured built-in USB ports, they have often limited its functionality. The Transformer Prime just does not suffer from this at all. We plugged in a 4GB pen drive as well as a 500GB external hard disk drive and transferred JPGs, TIFF files and blu-ray 1080p mkv rips without any issues. It even charged our iPhone and read the photo library on it. 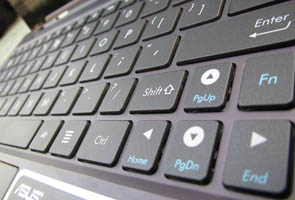 Performance
Since the Transformer Prime boasts an Nvidia Tegra 3 chip, we felt it was necessary to see how it performed under pressure. So the first thing we did was hook it up to our Wi-Fi and download a ton of apps from the Android Market. We also loaded every widget on various pages and ran as many apps as possible at the same time. At this point, the tablet and dock combo was at a 100% battery level.
Begin stress test at 8 am on day 1 and we multi-tasked, played games (ShadowGun HD), played music, watched a bunch of high definition movies and somewhere along the way, decided to give our laptop a day off and use the Transformer Prime for all our work related activities. The battery on the keyboard died at about 10:30 pm that day, so we removed the dock and continued using the tablet as normal; all the while being connected to Wi-Fi. By 2:30 am, we grew anxious as to why the battery on this won’t die. So we cranked up the brightness to full, turned on the Super-IPS display and went to town on it watching The Dark Knight.

By 4 am, we could barely keep our eyes open, but the Prime still showed 38% battery left! That’s about 18 hours of almost constant use! Since our activity was mostly multi-media dominated, we also made notes on the music and video playback. 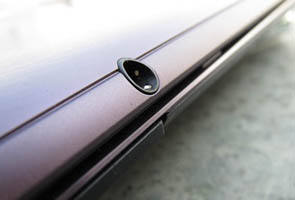 Our review unit came preloaded with Andriod’s Ice Cream Sandwich OS (though the official unit ships with Android 3.2 Honeycomb, user-upgradable to ICS) and the built-in music player was an absolute joy to use. Besides playing pretty much all common music formats (mp3, wma, flac, aac), we were overjoyed to see the ability to create custom equalizer settings so as to get the most out of our music.
We also loaded blu-ray rips in multiple formats (1080p mkv with dual audio, 1080p mp4, wmv, divx and xvid) and fired them up one after the other to see how the media player would handle it. That Nvidia Tegra 3 chip really seems to be a performance beast as not only did the player successfully play all the above mentioned formats, but it did so without any stutter during playback or while scrolling.
Our next performance test involved firing up a game of Angry Birds and for the first time, the birds didn’t stutter as they hurled themselves towards the pigs. Game play was as fluid as one would expect it to be. Next we loaded the free edition of Fruit Ninja to see how well the Transformer Prime would accept multi-touch input. Loading up the Zen mode, we emulated the claw movements of Wolverine from X-Men and surprisingly, the processor kept up with the slicing and dicing we did using four fingers.
During the ten odd times we played each mode (Zen, Arcade and Classic), the game did not lag even once, and mind you, this is all while there were already a bunch of apps running in the background. Since the Prime chewed through the two most popular games, we figured we’d give it a little more of a challenge and went ahead and installed ShadowGun on it.
Now ShadowGun is touted to be the only game capable of utilizing the Tegra 3 chip to the max and it surely lived up to its name. From the moment the game loads, it is just a pure visual treat. The game played through smoothly, only stuttering when we fumbled at the controls.

Camera
The Transformer Prime boasts a camera with a fast aperture of f/2.4 accompanied by a flash. What that means is that it can take photographs in low light conditions without breaking a sweat. It also features a front- facing camera for skype calls or for self portraits. We shot a few images using the auto settings and a few on custom settings and it produced pretty good quality results. The camera also has a very small minimum focusing distance, allowing for almost-macro-like photos if need be Just make sure you don’t use flash for such purposes though. The shooting interface on the device is pretty straight-forward and very user friendly, everything being self explanatory. The 8-megapixel shooter gets its enhanced image quality thanks to its back-illuminated sensor. 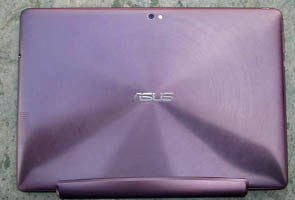 The Prime can shoot full HD videos, recording them in an mp4 format that is friendly with most common media players and DLNA devices.

Shortcomings
Unfortunately, all is not peachy in the land of the Prime. There are a few important areas where we feel the tablet is lacking, such as the absence of a physical orientation lock button, something that we have gotten extremely used to being iPad users.

The second subjective drawback with the tablet is its height. Sitting in at 10.1 inches, the tablet is taller than the iPad and often feels too stretched out. Not to mention, holding it in the portrait orientation for long durations becomes rather painful, not only due to the uneven weight distribution, but also due to the edges digging into your palms.

Another area of slight disappointment was the USB port. While it did connect to every device we attached to it, it failed to recognize our Canon 40D as a camera device or as a photo storage device. This was quite a set back as the iPad can communicate with camera devices, read the image data and even email those images if needed.

It is very clear that the Transformer Prime was designed to be primarily used in landscape orientation as the tablet feels very well balanced, which was not the case when we switched to portrait mode. Even taking photos in the portrait mode felt a little awkward as the camera is placed on the center of the long edge of the tablet. The biggest setback, however, happens to be the lack of 3G connectivity. It baffles us that in the age where connectivity reigns supreme, Asus decided to leave a 3G chip out of the Transformer Prime’s circuitry.

Verdict
So how much would the Prime set you back? A whopping Rs. 50,000 for the 64GB model. Again, this quote leaves us a little confused as to why Asus would price their 3G-less tablet at a price point ‘HIGHER’ than the iPad 2’s 64GB 3GWi-Fi version. The only consolation of such a high price point would be the keyboard dock that comes as part of the bundle.

In our opinion, the Transformer Prime is a solid performer that is built rugged without compromising on the aesthetics. Whether or not it will appeal to the Indian masses still remains to be seen.
You can visit our photo gallery for more pics of the Asus Transformer Prime.

Updates
The amazing feature of the Prime is its ability to integrate seamlessly with Dropbox. Once the application is installed, it essentially creates a folder in the Prime’s file-system, and it works exactly like its desktop counterpart. So when we started using the Polaris Office that comes preloaded on the tablet, we could seemlessly work with documents in our Dropbox folder. This is a great feature for those who are on the move a lot and need to keep their files updated and synchronized in multiple locations.

Polaris Office allows users to create Word, Excel and Powerpoint files along with the ability to edit such files from other common desktop counterparts. The interface takes a little getting used, to as the options are accessible through drop-down menus, but the simplicity of the interface makes it a breeze to use. Once again, common shortcuts such as Ctrl+B work just fine.

Asus offers something more than just quad-core processing and 12-core graphics for the gamer, and that is the ability to control certain games (in our case, ShadowGun HD) using a PS3 or an Xbox 360 wireless controller. Of course the controllers would need to be synced with the game.

This sets a whole new benchmark for gaming, as it allows you to connect the tablet to a television set through the built-in mini-HDMI port and then use the controller from the comfort of your couch. This offers the same experience as gaming on the console, at least for the casual gamer.