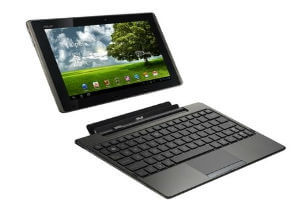 The tablet computers that compete with the iPad have mostly been uninspiring. The Eee Pad Transformer stands out with a design that isn’t just copied from the iPad: It’s a tablet that turns into a laptop.
For $399, $100 less than the cheapest iPad, you get a tablet computer with a 10-inch screen and hardware that doesn’t cut corners. It’s fully usable on its own. For another $149, you can buy a keyboard that connects to the tablet. Together, they look and open like a small laptop.
The Transformer is made by Asustek Computer Inc., the Taiwanese company that started the brief “netbook” craze a few years ago by selling small, inexpensive laptops. With the keyboard attached, the Transformer is nearly indistinguishable from a netbook.

But before you get too excited about the prospect of a laptop-tablet hybrid that combines the best of both worlds, I have to tell you that you’re not getting a Windows laptop in the bargain. The Transformer runs Google Inc.’s Android software, originally designed for smartphones.
That means it doesn’t run full-blown Windows programs or connect to peripherals such as scanners. This isn’t all a bad thing, as Android comes with important advantages, such as a long battery life, programs designed for touch input and a computer that comes to life almost immediately when you open the lid.
The keyboard may sound a bit expensive for $149, but it does more than help with typing. It has a track pad with “mouse buttons,” just as you’d find on a laptop. It also contains an extra battery that charges the tablet’s battery, two USB ports for connecting peripherals and a slot for SD memory cards, used in most digital cameras.

I tested the battery life by playing a high-definition video over and over again, with the screen set to medium brightness. I got a respectable nine hours from the tablet alone and 13 hours with the keyboard attached. That compares with 10 hours for the iPad 2.
The screen uses the same technology as the iPad’s, making it easy to read from any angle and in any orientation. It is slightly larger than the iPad’s and has a slightly higher resolution.
The Transformer has two cameras, as we expect from this year’s tablets. The picture quality is so-so but more than adequate for videoconferencing through Google Talk.
Of course, you could get an iPad and an accessory keyboard instead. There are good reasons for doing so — I’ll talk more about the software below — but let’s stick for the moment to discussing what’s good about the Transformer.

The iPad doesn’t make any particular accommodation for a keyboard. The accessory ones connect using short-range Bluetooth wireless technology, which can be a hassle to connect and troubleshoot. It also means the keyboards need separate batteries — Apple’s own model uses two AAs. The battery in the Asus keyboard doesn’t need to be charged for the keyboard to work, and in any case, it uses the same charger as the tablet.
Most iPad keyboards don’t attach to the tablet itself, because there’s nothing to hang on to. This is fine if you’re at a table, but juggling an iPad and a separate keyboard on your lap can be difficult. Some iPad keyboards are built into a case, which covers the tablet and forms a laptop-like unit, though an inelegant one.

The Transformer has two slots for the keyboard to lock into, forming a sturdy whole that’s easy to use on a lap or tummy, for those really lazy moments on the couch.
There’s another nice thing about the Transformer keyboard: The keys are designed for the software. There are keys that bring you to the Home screen and Settings. Others control screen brightness, volume and media playback. There are buttons for the Back and Menu functions of Google’s Android software.

This isn’t the first time we’ve seen small laptops running Android, but it is the first time I’ve used one that runs Honeycomb, the first Android version specifically designed for tablets rather than smartphones. The update makes Android much better at taking advantage of a 10-inch screen.
But as tablet software, Android is still far behind Apple’s iOS software for the iPad. The biggest problem is the low quality and poor selection of applications from outside companies. Many of my favorite iPad apps, including Netflix and The Wall Street Journal are not available at all. Others, such as The New York Times, are available only in inferior versions, designed for the smartphone screen rather than the tablet.

I also had frequent crashes when using the applications. The Transformer is perhaps the best Android tablet out there, especially considering the price, but the software is still a major weakness. Still, the beautifully integrated keyboard should tempt people who don’t want to decide between a tablet and a laptop.