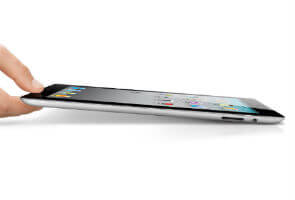 Introduction:
The first iPad was a revolutionary product. There were naysayers galore, nobody was even sure it would work – neither a laptop nor a netbook, and there was no keyboard. Xxx years later, the iPad has sent the competition scrambling to produce tablets of their own.
So is there a tablet better than the iPad? Yes there is. The iPad 2.
These are interesting circumstances for a new version of the device. It’s only competition is the first version of itself, which was so pathbreaking a device that it’s a very tough act to follow.
With iPad 2, Apple has done what it does best with follow-up acts – they’ve kept it simple. Users complained that version 1 was too heavy for prolonged use, and carped about the lack of cameras. Version 2 is 30 per cent slimmer, 15 per cent lighter, and has two cameras. Under the hood, there is a new dual-core A5 chip, to make iPad 2 run a bit faster. As a bonus, there is a nifty smart cover. Lets take an in-depth look.

Hardware
The iPad 2 scores full marks on the way it looks. The square edges of the first iPad have given way to an absolutely thin edge which curves a bit to the back, very similar to the first iPhone.
The whole design of the iPad 2 makes it look slimmer than it actually is. But, even at its thickest, it is just about a third of an inch thick – a hair-breadth thicker than a pencil.
Among the most important additions to the iPad 2 are the cameras. On the front, the camera is housed in the middle of the top bezel and on the back it is housed on the top right corner. More about the cameras below.
The other connections and buttons remain the same as they were on the previous iPad. These include a sleep/wake button on the top right, a headphone jack on the top left, silent/screen lock rotation on the right, housed next to the volume rocker and the 30-pinApple connector at the bottom edge.
iPad 2 is available in both black and white.

Cameras
Welcome addition though it be, this is one upgrade that Apple could have done better. The cameras are barely adequate for a path-breaking device like the iPad. They probably use the same sensors as the iPod touch.
The front camera is a VGA and the rear camera is about a megapixel as it can shoot HDvideo in 720p. The cameras are adequate for occasional video, but are best avoided for taking photos.
But the one thing they work particularly well for? Facetime, Apple’s version of video chat. The iPad’s big screen coupled with the two in-built cameras make video chat a very special experience on the iPad 2. The only catch is that Facetime does not work on 3G and requires a Wi-Fi network.
Gaming and multimedia
Apple has introduced their latest A5 processor in the iPad 2. The dual-core powerhouse promises to make the tablet twice as fast as the previous version and multiplies its graphics performance by nine times.
The difference really pops while gaming on the new iPad. The visuals are detailed and crisper. The difference is pronounced enough for games like Infinity Blade and FIFA to launch updated versions optimised for the iPad 2. Even Angry Birds Rio seemed to work faster on the iPad 2 than the original iPad. There is also a separate section in the app store that caters to games optimised for the iPad 2.
Videos and music are not very different from the original iPad and are of the same top-notch quality. Better in-built speakers would have helped. iPad 3, maybe?

Apps
With the new iPad, Apple also launched some new applications – the Photo Booth, Garage Band and iMovie. While Garage Band will even make novice musicians sound like maestros, iMovie tries to make movie editing on the move easier. iMovie in particular makes use of the faster processor in the new iPad to quickly edit movies, apply cool transitions and include snazzy sound effects. But, you might face a problem while importing video to edit. You will either need to shoot the video using iPad’s in-built cameras or import them using the SD card adapter while ensuring that they have been shot in a format that the iPad can play with.
Photo Booth remains a lot of fun in its iPad avatar too. It will entertain children for hours and possibly get the adults interested for a while. With 9 different live previews at one time, it really shows how the iPad’s graphics prowess has increased.

Smart Cover
A key innovation to the new iPad is the Smart Cover. Unlike other cases, the Smart Cover is more like a screen protector that is, well, smartly built. It not only protects the screen, it helps to clean it too and wakes up the iPad as it is opened.
The way it connects to the iPad is also quite unique, by using magnets. It will take you all of 3 seconds to attach the smart cover to the iPad. The ribbed construction also allows you to fold it into ways that makes the iPad easy to hold and prop-up on the desk.
However, it’s not all good – the Smart Cover does come with a set of problems. It does not cover the back of the iPad, so you will end up scratching the shiny aluminium back sooner than you think. The ribbed construction causes ugly dirt lines on the iPad screen if you do not clean the screen regularly. Despite these minus points, it is, beyond doubt, the smartest iPad cover till date. So much so, some people wanted to buy the iPad just for the cover.

Verdict
Bottomline: is it faster and thinner? It is. But, as we said straight off, the original iPad is a tough act to follow. It doesn’t warrant an immediate upgrade, even though the iPad 2 is a worthy successor. If you have the original iPad, you may want to hold on to it, unless you want to video chat.
If you do not have a tablet and are thinking of buying one, the iPad 2 is a nobrainer. With thousands of apps and no serious competitor, it is your best available choice.