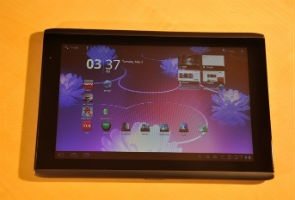 Introduction
Until the arrival of Honeycomb, most tablets were playing catch-up with Apple’s all conquering iPad and it’s smartphone OSs. Now, in its second generation, the iPad 2 is likely to face some serious competition from the likes of Motorola, Acer, Samsung, HTC, Dell and other manufacturers who are embracing Google’s tablet specific Honeycomb OS.
One such might be the Acer ICONIA A500, the first Honeycomb tablet to hit India. Can it take a bite out of the big Apple?

Hardware
The 10-inch A500 seems extremely thick at 13.3 mm versus the sub-10mm frame of the iPad 2. It is interesting to note that the original iPad was 13.4 mm thick. So the competition is still trying to emulate the original iPad even the next version has set new benchmarks for sheer form factor.
Quite naturally, when compared to the iPad 2, the device is bulky and feels heavy. It is quite a challenge to use while reading books. You will also find yourself setting the device down very often, because of the weight factor.

Having said that, for a first generation device, it has good build quality and looks good with the brushed metal finish.
In terms of connectivity, the device has the power switch, headphones jack and mini HDMI out port on the left panel. The right houses the charging port along with a micro USB port and a full sized USB 2.0 port. Please note that the device will only charge through the charging port and not the micro USB port. The top of the device has the micro SD card slot that is covered along with the volume rocker and the screen orientation lock whereas the bottom of the device has Acer’s proprietary dock connector. All the buttons feel logically placed and are convenient to use.
The rear of the device houses a 5MP autofocus camera with a single LED flash and the front has a 2MP camera for video chatting.

The screen is a 10.1-inch LED backlit display with a resolution of 1280×800.
Under the hood, the device is powered by NVIDIA’s 1GHz dual-core Tegra 2 processor with 1GB RAM. The review unit we received was Wi-Fi only but a 3G version is expected to launch as well.
The A500 has 16GB of onboard storage and another 32GB can be added via a micro SD card.
Overall the hardware of the device seems to be at par with other Honeycomb offerings available in the global market such as the Motorola Xoom.

Android Honeycomb
Previous tablets such as the first generation Samsung Galaxy Tab ran Android’s smartphone OS. Honeycomb has been built from the ground up keeping the tablet in mind, which means it will not only take advantage of the larger display but the processing power of the tablet as well.
If you already own an Android device and are used to the functioning of the OS, you will find yourself on familiar ground. Even so, as the OS is customized for a larger display than your smartphone, there is a learning curve especially with some particular widgets.
True to the Android tradition, there are five customizable homescreens. However, gone are the standard four physical buttons you would find on an Android smartphone – the home, menu, back and search. Instead, you have the back, home and menu buttons displayed all the time in the bottom left corner of the screen on the notification bar. No matter what app you have open.
Another visual element that remains constant on screen resides on the bottom right corner. This is the time, battery and Wi-Fi indicator. This corner also doubles up as the notifications area. It doesn’t matter if you are playing a game or running an app. If you receive a chat message, an email, a software update or any form of notification, it will appear here. The notification system on Honeycomb is way better than the one visible on the iPad.

Customizing your homescreen is a lot of fun. But, if you are used to the simplicity of the iPad you may find it a bit frustrating. The homescreen customization option is divided into widgets, app short cuts, wallpapers and more. The only unique aspect here is the widgets, which looks really cool. You could have your Gmail, website bookmarks, calendar events, market updates etc. on one screen. Seeing the customization options of the widgets really gives you the vast scope of the device and convenience of having all your data flash on one screen.

The overall performance of the OS is great but there are times when it feels buggy. There was a point where the home button just wouldn’t respond until we restarted the device. Though these problems are not major, they can be fixed by a simpler update.
Recently at the I/O event, Google showed off an update to Honeycomb (version 3.1). One of the advantages of this update is the improvement in the widgets on the device. The 3.1 update allows the widgets to have custom sizes.
Although this update is limited to the Motorola Xoom we can expect it to hit other Honeycomb devices soon.

Cameras
The rear of the device houses a 5MP autofocus camera with a single LED flash and the front has a 2MP camera. The camera app has been optimized to take advantage of the 10.1-inch display. The controls such as zoom, flash, white balance, colour effects, scene mode and settings rest on the right of the display. The layout design of the camera controls is unique and looks really cool. It gives you a lot more control on the images you click when compared to the iPad 2 but you do feel the absence of a physical camera button.
The quality of the camera is pretty standard and can be compared to the camera that resides on your smartphone. But, the quality of pictures from this is much better than the iPad 2 cameras.
The front facing camera works well especially with Google video chat. You can rotate to the rear camera if you wish to show something specific to the person you are chatting with. It works a lot like Apple’s Face Time with the only difference being that Google video chat can happen between any two computing machines that support Google video chat unlike Face Time, which is restricted to Apple products.

Gaming and multimedia
Games on the Acer ICONIA A500 look absolutely stunning. The device came preloaded with NFS Shift, Lets Golf HD and Hero of Sparta HD. Need For Speed HD looked really good and Hero of Sparta was the highlight. Angry Birds Rio, too, was stunning on the 10-inch display. Although there aren’t many tablet specific games available for Honeycomb devices, the existing smartphone games scale relatively well on the 10.1-inch screen.
A game we recommend you download is Fruit Ninja for Honeycomb. It is a paid app and is different from its smartphone cousin only in that it incorporates multi-touch, which is really cool.
The inbuilt multimedia features are good. The photos, videos and music app have an interface that takes advantage of the 10.1-inch display. The audio from the device was pretty nice for a tablet. The stereo speakers help a lot and sound much better than the iPad 2.
The video app was a little disappointing as it refused to detect any other format except for MP4. MP4 720p videos ran very smoothly on the device.

On the bright side, and this is an India specific observation, the USB port will be Internet dongle compatible in the near future. Acer has confirmed to us that you will be able to connect your Reliance or Tata Photon dongle to the tablet to access the Internet. This feature will not be available out of the box and users will have to wait for an update before taking advantage of this feature. With this, you will be able to use your current dongles to connect to the Internet, without the need of a 3G version of the device.
The earlier mentioned 3.1 Honeycomb update will also let you connect game controllers via the USB port enabling more comfortable gaming for hard core veterans. No word on when we will see the update hit the A500.
The browser on the tablet has a Chrome experience to it. Tab browsing on a tablet device is great. Add the flash support and you have a browser that can give Apple’s Safari a run for its money.
Apps

There are quite a few Honeycomb specific apps on the device but the ones that need special mention are the YouTube and Gmail apps.
YouTube has a tile-based view, which has a very Matrix like feel to it. The 3D interface is extremely intuitive and spans the whole screen. The browse tab too has been optimized for use on a tablet device. The videos themselves play out smoothly and the navigation options are great and easy to use, unlike some frustrating Windows based tablets.
The Gmail app too has been optimized for tablet display. It looks more like Microsoft Outlook with mail labels on the left column, and the mail list and details on the right panel. Extremely intuitive and easy to use. But, here’s where the weight disadvantage kicks in again – you’re not going to be able to use it for email very long because of how heavy the device is.
Another noteworthy point; There aren’t many Honeycomb specific apps available on the app store. But the mobile versions of apps scale quite well on the tablet device. There are a few bumps such as some images may look pixelated, stretched or out of proportion. Some text alignment too may seem off but the overall scalability of applications is commendable.

Case
Acer gets two thumbs up for bundling a case with the A500. It is nowhere near the awesomeness of the Smart Cover but it is handy for protecting the device. The case also doubles up as a stand that rests the device horizontally. And the best part is that it is free.

Verdict
As the first Honeycomb tablet to hit India the Acer A500 is good. The device is a few thousand rupees cheaper than the 16GB Wi-Fi only iPad 2. If you are looking for an experience other than the iPad you may want to take a look at the A500. But if you’re in the market for a sleeker Android based tablet, you may want to hold-off until the Samsung Galaxy tabs hit India.
Bottomline: Does the A500 qualify as an iPad 2 killer? No.
However, it holds some interesting promises such as Internet USB dongle support that is great for the Indian market.
The device and the OS aren’t perfect. But for as an India debut for Honeycomb, it is a really good start.