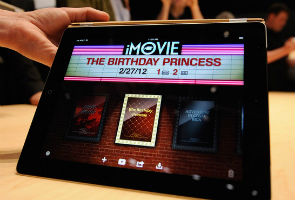 On Friday, the new iPad goes on sale. Be sure to ask for it by name: the iPad.
Because if you ask for the iPad 3, the Apple representatives will look at you funny. Last year’s model was called the iPad 2, but this third-generation model is just called the iPad. (Why not continue the numbering pattern? “That would have been too predictable,” says Phil Schiller, Apple’s senior vice president for marketing.)

Really, the new iPad should have been called the iPad 2S. In the past, Apple added the letter S to iPhone models that weren’t exactly new but had been tastefully enhanced (iPhone 3GS, iPhone 4S). That’s exactly what’s going on with the new iPad. Its technical improvements keep it at the forefront of desirability – just ahead of the snapping jaws of its Android competition – but don’t take it in any new directions.

The biggest new feature is what Apple calls the Retina display: like the one on the iPhone 4S, it’s a very, very sharp screen. It’s four times as sharp as the iPad 2 – in fact, it’s the sharpest ever on a mobile device. This screen has 3.1 million pixels, which is 1 million pixels more than on a high-definition TV set. (At least Apple says that that’s how many pixels it has; I quit counting after three days.)

In principle, that avalanche of pixels (and their increased color saturation) means that photos, videos, maps and text should look jaw-droppingly good – and, in apps that have been rewritten for the new screen, they do. Apple’s own apps, like Photos, Maps and iBooks, are just incredibly sharp and clear.
So are Apple’s inexpensive, newly enhanced iPad apps – iMovie, GarageBand, the Numbers spreadsheet and the Pages word processor. And as touch-screen apps go, the new iPhoto for iOS is a masterpiece.
But apps that haven’t been rewritten don’t benefit as much. In most apps, text is automatically sharpened, but not in all of them. After enjoying the freakishly sharp text in Mail and Safari, you’ll be disappointed in the relatively crude type in, for example, the non-updated Amazon Kindle app. (Amazon says that a Retina-ready update is in the works.)

Similarly, high-definition videos look dazzling. This is the world’s first tablet that can actually show you hi-def movies in full 1080p high definition. But Netflix’s streaming movies don’t come to the iPad in high definition (yet, says Netflix), so they don’t look any better.
There’s another price you’ll pay for all this clarity, too: in storage. Tests performed by Macworld.com revealed that the graphics in Retina-ready apps consume two to three times as much of the iPad’s nonexpandable storage than pre-Retina apps. To update their apps for the new display, software companies must redo their graphics at much higher resolution, which means much larger files.
(Worse, each app is usually written in single, universal version for all iPad models. So those apps will eat up the same extra space, pointlessly, on older iPads, too – and even on iPhones, since many apps are written to run on both the tablet and the phone. In other words, iPhone owners, too, will wind up losing storage space because of this graphic-bloat ripple-down effect.)
The resolution revolution isn’t the only change in the iPad That Shall Not Be Numbered. Another big change is 4G LTE.

That is, the cellular iPad models can now hop onto the very fast 4G wireless networks for data that Verizon and AT&T have built in big American cities.
(Apple has not changed the prices and configurations for the new iPad. The base model still costs $500, has only Wi-Fi and holds 16 gigabytes. The top-of-the-line model still costs $830, has 64 gigabytes of storage and can also get online via a cell network. You have to choose either the AT&T or the Verizon model, in that case, and pay a monthly fee – $15 to $50 a month, no contract required. These iPads can also get online overseas, although only at 3G speeds; LTE uses different frequencies in other countries.)

Being on LTE flavor of 4G is really, really nice. Apps download quickly. Web pages appear fast. You don’t have to wait for videos to load before they start playing. The Verizon iPads offer tethering – a feature that converts that cellular Internet connection into a Wi-Fi hot spot – so nearby laptops can now enjoy the same high Internet speeds. (AT&T says it’s working to get tethering.)
My Verizon test unit got download speeds ranging from 6 to 29 megabits a second in San Francisco, Boston and New York – in many cases, faster than home cable-modem service. According to tests by PC Magazine and others, AT&T’s 4G network is smaller, but often faster. No doubt about it: life begins at 4G.
Now, 4G is a notorious battery hog. It scarfs down electricity like a football team at a hot dog eating contest.
Apple, however, was determined to keep the iPad’s battery life unchanged from the last model: nine to 10 hours on a charge. In my all-day nonstop-usage test, it did manage nine hours.
To pull that off, Apple adopted a three-prong strategy. First, it developed or adopted components that use less power (Bluetooth 4.0, for example). Second, it came up with various software and circuitry tricks.

Third, it incorporated a fatter, heavier battery. The new iPad is one millimeter thicker, and 1.8 ounces heavier, than the iPad 2. It’s a very slight difference, but fingers used to handling the old iPad will feel it, and that’s too bad.
Interestingly, you can turn off the LTE antenna in the Settings app. Without that power hog, you’ll probably get even better battery life.
So what else is new? A 5-megapixel back camera that takes far better photos than the iPad 2 did. (Which isn’t saying much.) You can capture 1080p hi-def videos now, and a stabilization feature lends a hand when yours is shaky or moving.
A tiny microphone now appears on the on-screen keyboard. Tapping it lets you speak to type, exactly as on the iPhone 4S.
For most people, that’s a huge blessing; typing on glass has never been a joyous activity. The recognition is fast and accurate, at least when you have a strong Internet connection (the transcription is actually performed by faraway servers).
Weirdly, though, speech-to-text is the only piece of Siri, Apple’s smart voice-control software, that the new iPad inherits from the iPhone 4S. You don’t get the rest of Siri’s features: the ability to set alarms, send text messages, look up calendar appointments and snag facts from the Web just by asking out loud. That the full Siri isn’t available smacks more of a marketing department holdback than technical limitations.

The world has changed since the iPad 2 came out. Stripped-down, smaller and far less magical rivals like the Kindle Fire and the Nook Tablet cost only $200. (That, probably, is why Apple still sells the iPad 2 at $100 less than the new models.)
Dozens of would-be iPads have come – and, in many cases, gone. (Shall we have a moment of silence for the Hewlett-Packard TouchPad and the flailing BlackBerry PlayBook? Nah.)
But the surviving rivals still sell in minuscule numbers compared with the iPad, and that’s not likely to change now.

The new iPad doesn’t introduce anything that we haven’t seen before, either in the iPhone or in rival tablets. There’s no Steve Jobs “one more thing” moment here; Apple just took its white-hot iPad and added the latest screen, battery and cellular technologies.
If you’re in the market for a tablet, here’s the bright side: For the same price as before, you can now get an updated iPad that’s still better-looking, better integrated and more consistently designed than any of its rivals.
And if you already have the iPad 2, here’s an even brighter side: At least this time around, you don’t have to feel quite as obsolete as usual.