The Fonepad, is the first tablet from Asus to offer voice calling. It’s also the first tablet to be powered by an Intel processor. At a price point of Rs. 15,999, we believe that Asus has got the pricing of the tablet right. Running the latest version of Android, and offering a screen comparable to the Nexus 7, we try to find out if it is a compelling buy in a market full of different options.

Build/ Design
The tablet sports a compact form factor. Design wise, it might not feel as premium as the iPad mini or the Nexus 7 but with its brushed aluminium finish at the back, it doesn’t feel cheap.
Its 7-inch screen dominates the front of the tablet and there are no hardware controls. A chrome earpiece grill and the 1.3-megapixel camera lens sit above the screen, while there’s some Asus branding below the screen. 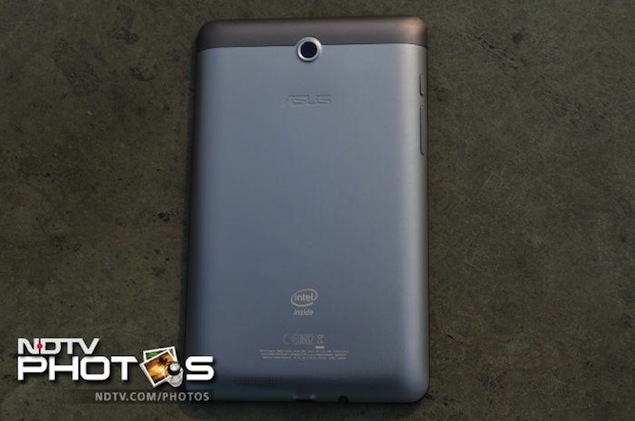 The back consists of two parts – a large non-removable metal part that sports a matte aluminium finish, and a small bronze coloured plastic strip on top that is removable. The power/ lock screen and volume rocker keys that are located at the left side (in portrait mode) are embedded within the metal part. We found the placement of the power key a bit odd as it’s placed on the right side on most devices. A small speaker outlet is also located at the back, towards the bottom, while the 3.2-megapixel-camera lens is located towards the top. The strip also houses a secondary microphone.
As we mentioned earlier, there’s a removable plastic strip at the back. It hides the Micro-SIM and microSD card slot. There’s a micro-USB port and a 3.5mm headset jack at the bottom of the tablet along with a microphone.

Display
The 7-inch display of the Asus Fonepad 2023 sports a resolution of 1280×800, the same as that of the Nexus 7. The display of the tablet offers good viewing angles and is ideal for use as an e-book or magazine reader as text appeared sharp and images vivid. Videos also looked decent.
However, we found the under sun visibility to be average even with the ‘Outdoor’ brightness mode turned on, as the screen is very reflective. Our other gripe with the screen was that it’s a smudge magnet and gets soiled within a few minutes of use.

Camera
The Asus Fonepad comes with a 3-megapixel-rear camera and a 1.2-megapixel front facing camera. 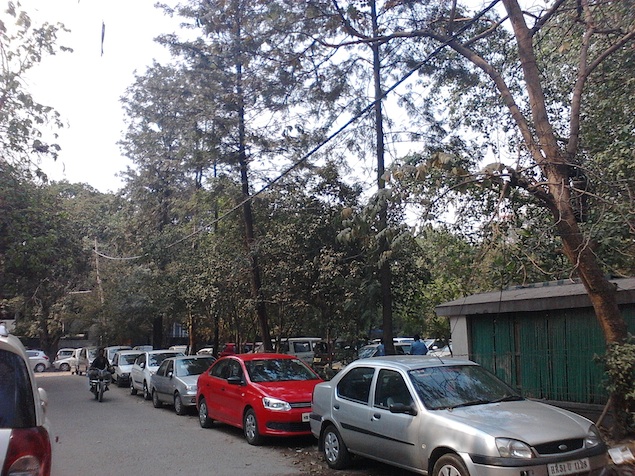 The camera app offers a lot of options including Panorama mode, settings for exposure, white balance, and ISO, among others.
We found that the pictures taken with the rear camera were just about average. Pictures taken in less light and indoors were grainy. Video capture quality was good but frame rendering was not that smooth. Video captured through the camera is saved in .3GP format, which is an old format. 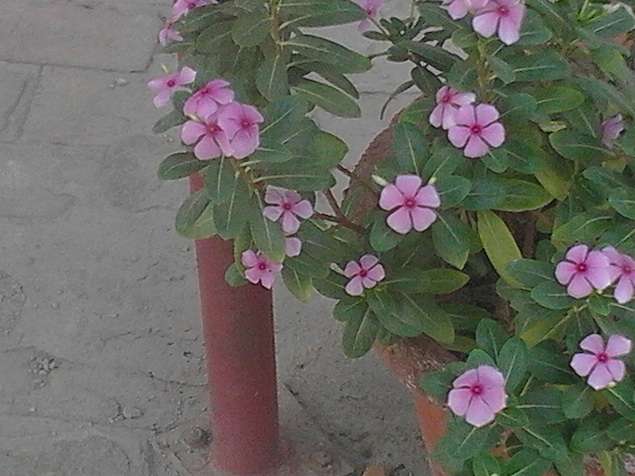 The front camera is strictly functional and can be used for video chats using Skype.

Software/ User Interface
The Asus Fonepad 2023 tablet runs Android 4.1.2 Jelly Bean. It doesn’t run the stock version of the OS and Asus has customised the user interface skinning some elements such as the notification tray and adding another button with the Android onscreen navigation keys, in addition to including some additional apps, widgets and features.
There are five customisable home screens that can be filled with app shortcuts and widgets. The standard app-launcher and dock that allows users to place six of their preferred apps are omnipresent across all home-screens. 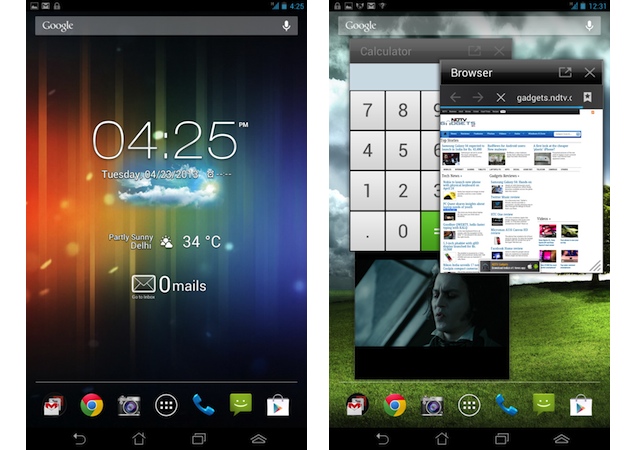 The tablet’s onscreen controls (for Home, Back, App Switching and floating apps) are at the bottom, and the notification tray and quick access settings (for brightness, Wi-Fi, Mobile data, Smart Saving mode, Wi-Fi hotspot Screen rotation, Bluetooth, GPS, Sound and shortcut to Settings) are located at the top area in the notification tray, in a manner which is a bit different from the stock build of Android on the Nexus 7. The notification tray is not flat and bears a shiny blue texture.
The tablet comes preloaded with some apps including the Amazon Kindle app for e-books, App Backup to take backups of apps and their data, App Locker to password protect apps, Asus Story to create photo books, Asus Studio to browse, manage and edit pictures, Audio Wizard to select pre-defined sound playback modes, an app to block specific callers, BuddyBuzz to browse social networks like Twitter and Facebook, a File Manager app, MyBitCast for taking voice, image and text memos, MyLibrary Lite- another e-book reader app, MyPainter, Press Reader for reading newspapers, Sticky Memo, SuperNote Lite, To Do List and Zinio app for reading magazines. Unfortunately, it’s not possible to delete any of these bundled apps. We feel that a lot of these apps are just bloatware taking up space unnecessarily.

As we mentioned earlier, the Fonepad is a Jelly Bean tablet and as with other devices running this version of the OS, it also offers ‘Google Now’, which is a voice based information assistant. You can ask questions and the tool returns answers or search results. It uses ‘cards’ which are essentially small boxes that offer different sets of information ranging from weather forecast, directions, traffic information, scores, appointments, and currency conversion, among others. Google Now collects information based on the user’s behaviour, location and even email to offer information, automatically. 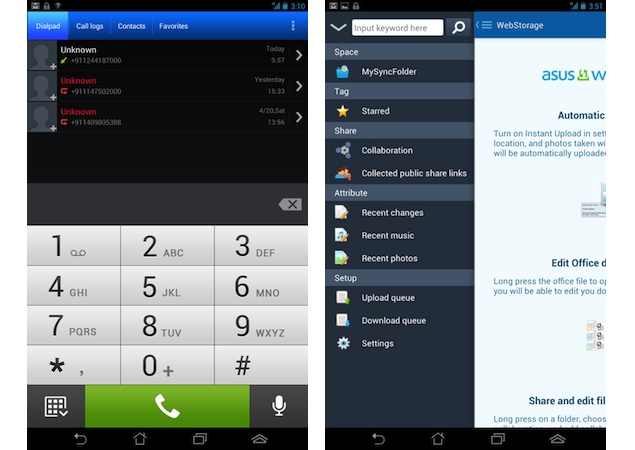 Asus also offers 5GB of additional data storage space on its servers via its WebStorage service through which one can collaborate and sync documents, photos and videos across devices.
Just like Samsung’s multi windows apps and Sony’s small apps, Asus has also added floating apps for utilities like calculator, countdown timer, stick memo, stopwatch in addition to floating apps for browser and video player. One can simultaneously run these apps on top of other apps in order to multi-task.

Performance/ Battery Life
The tablet is powered by a 1.2GHz Intel Atom Z2420 processor, coupled with 1GB RAM and a PowerVR SGX540 GPU. The tablet performs decently when it comes to doing routine tasks. It offers 8GB of internal storage which is expandable to 32GB via microSD card. However, out of the 8GB memory we were able to only access 4.39GB.
With Android 4.1 Jelly Bean, the overall experience of navigation through the interface was extremely impressive, thanks largely to Project Butter. We did not experience a major lag while launching apps, scrolling web pages or switching between apps.

However, we did notice that games such as Temple Run2 and Subway Surfers took some time to load and there was a slight lag while playing them. We were also not able to play ShadowGun: Deadzone as it crashed continuously after loading initially. This is likely an app compatibility issue related to the tablet’s Intel processor. 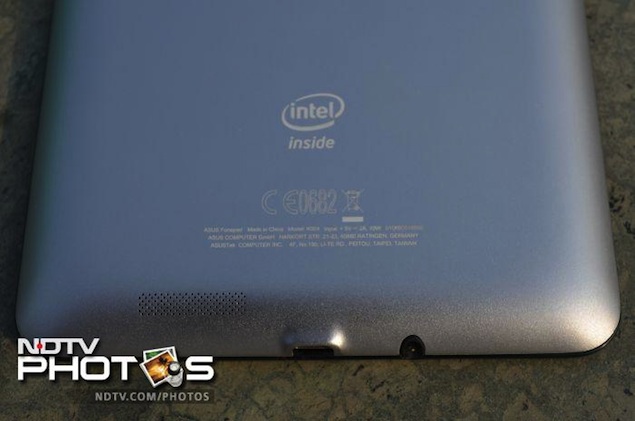 The tablet comes with the native Android browser and Chrome, and renders all webpages well. The speaker grill on the back of the tablet delivers average quality sound and we found the volume levels to be low. This is a big problem when you want to use the speakerphone for making phone calls. We also found that the tablet did not work with all headsets.
The tablet worked decently as a phone delivering good call quality and was able to latch on to the network in weak signal areas. We’re not sure if everyone would be comfortable using it as a phone without hooking up a Bluetooth headset as we found it to be a little large for one hand usage.
The Fonepad comes with a 4270mAH battery and we were satisfied with the backup that it offered. We were able to get around 7 hours of video playback, even with the display on full brightness levels. The tablet lasted about a day and a half with push notifications and e-mails on, 1-1.5 hours of phone calls, an hour of music and video playback, and half an hour of playing games. It’s worth pointing out that we had turned off Wi-Fi and auto-brightness, and the tablet was hooked to a 3G network with the screen brightness at the highest level. Altering these settings might help in running the tablet for a longer duration, depending on your usage pattern.
The tablet also offers a Power Saver mode to optimise and extend battery life. It can also be configured to behave differently during different usage scenarios like reading books, watching videos, browsing the Internet, among others.

Verdict
The Asus Fonepad is a good tablet that also offers voice functionality. If you’re looking for a device that lets you read books, browse the web, watch some videos, click casual shots and make occasional voice calls, look no further.
At a price of Rs. 15,999, the Fonepad is a great buy even if you want to use it as a 3G enabled tablet.
The Fonepad takes on the Samsung Galaxy Tab 2 that has been in the market for quite some time. The tablet has now been updated to Android Jelly Bean and is also available for Rs. 15,999. 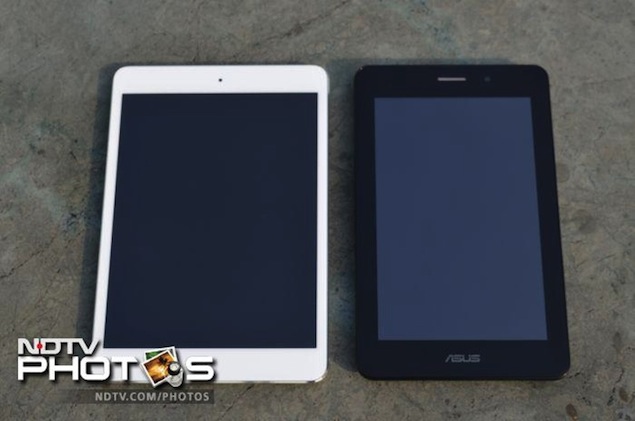 If you’re finicky about hardware and want nothing but the best, then we’d suggest you go for the Nexus 7 3G tablet that costs Rs. 21,999 but doesn’t offer voice calling. It’s still the best 7-inch Android tablet available in the market, and will be the first one to receive Android updates.
If you don’t mind looking at the other side of the arena, you can also consider the iPad mini (3G+Wi-Fi), which is a great tablet but costs a lot more.