Final Fantasy XV (FFXV) is a game that’s been nearly a decade in the making, and we spent a little time with the demo – Episode Duscae – trying it out ourselves. The game looks great, and steeped in detail. Does the rest of the demo hold up, or does FFXV favour style over substance?

The Final Fantasy series of role-playing games (RPGs) has been around since 1987. It’s seen 14 games (including two massively multiplayer online RPGs) and several spin-off games. And while that might sound like a lot for newcomers to the series to digest, it’s important to note that barring certain themes and elements, each game in the mainline series features a completely different set of characters, storyline, and setting. You don’t need to know the events of previous entries to be able to make sense of the story of the game you’re playing.

This makes the series a less daunting prospect for many an RPG neophyte. Meanwhile, old timers who play FFXV will know that it started life as Final Fantasy Versus XIII (a spin-off to 2006’s Final Fantasy XIII). 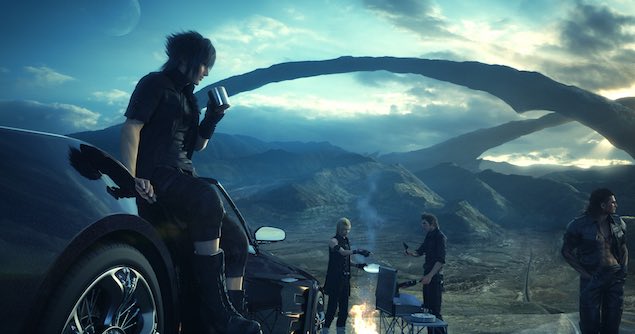 The game was announced at the same time in 2006, and almost a decade later, we’re finally on the receiving end of its first public outing; people who buy the newly released Final Fantasy Type-0 HD can download the Final Fantasy XV demo, titled Episode Duscae.

Weighing in at 6.29GB, the demo puts you in the role of Noctis, a prince on the run from powerful enemies that want you dead. You find yourself in the region of Duscae after your car broke down. Along with your three companions, the royal advisor, a bodyguard, and a childhood friend you make your way across forests and caves teeming with monsters in order to get the funds needed to get your car running and have you back on the road again.

The first thing that hits you is how good it looks. From small items like a slice of toast to grand, powerful beasts, the visuals are steeped in detail. And barring the initial loading screen, there’s little else in the way of breaking what appears to be a seamless, open world experience.

The entire region of Duscae is your playground in this demo. It’s up to you to choose whether you decide to take on the main quest of slaying a Behemoth (in order to procure the money you need to get your car fixed) or just play the many side-quests the game throws at you, or both. This is a refreshing change of pace for a series that’s been extremely linear in the past.

Another change is the free-flowing nature of the combat. Other games in the series feature turn-based battles, but every fight in FFXV takes place in real time. You can win most fights by just mashing buttons blindly, so it doesn’t do justice to an underlying system that’s actually pretty deep.

Aside from being able to parry and counter-attack multiple enemies, you can assign weapons to different kinds of attacks such as a barrage of melee blows, or crushing hits executed on jumping. These special attacks can be linked to different weapons in your gear. 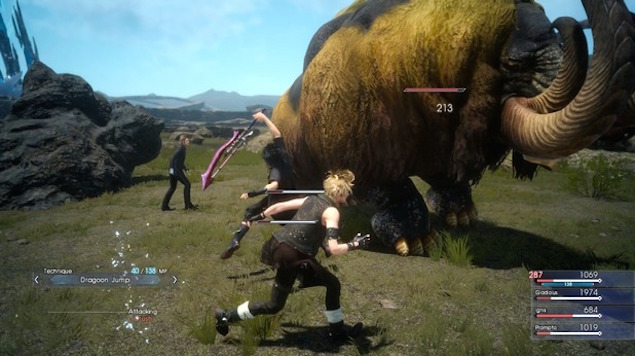 Some weapons regenerate your health when you attack, and others increase the chances of landing critical hits, so you’ll be optimising your gear a lot. With the right combination of special attacks and weapons, you can set up actions to deliver more damage, protect yourself from harm, or power up your health and magic with the right attacks.

On the flip side, unlike other RPGs FFXV doesn’t let you control other the characters in your party. You just fight as Noctis. And although Noctis has some interesting abilities – such as being able to warp across the battlefield and do some serious damage to the opposition – this might be a deal-breaker for those who prefer absolute control of the ebb and flow of battle.

It’s perhaps the most divisive element of the game. Old fans of the series are used to the turn-based micro-managed affairs of the previous games, but FFXV evokes hack and slash games like Devil May Cry instead.

There are other changes to the tried and tested formula. Saving the game grants status bonuses at random such as nullifying poison attacks or increasing the party’s experience gains. And you don’t see a game over screen when your health is reduced to zero. Your party members can revive you and you can do the same for them before a secondary health bar depletes itself.

These are interesting additions to the gameplay that should, in theory, make for a more strategic experience but they do not. This is because the implementation of these many concepts seems incomplete. Combat feels extremely clunky. It’s tough to target multiple groups of enemies, forcing you to take them out one at a time. Warping around the battlefield is iffy too.

By teleporting to higher ground you can regain health but targeting higher ground is nigh impossible. Status buffs (bonuses) are a welcome addition but the game often throws you in a situation that demands a specific status bonus – but then does not give it to you, making things a whole lot harder. 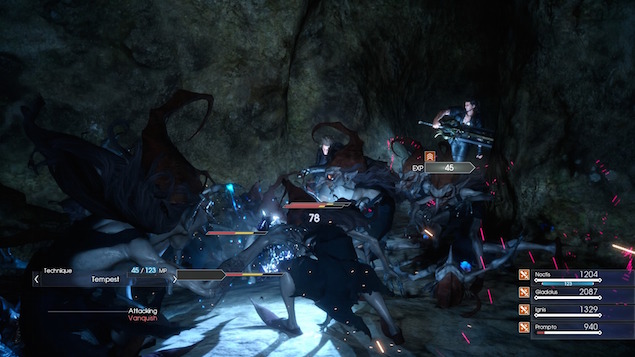 For example, in the main quest you have to fight through a cave filled with poison casting goblins. Saving prior granted us a few bonuses but it didn’t include the ability to neutralise poison spells. Then, the game literally spams these poison wielding monsters like it was an e-commerce startup giving discounts with newly found venture capital. The uneven checkpoint system for saving progress just made it worse.

While a large section of the press is joyous that FFXV finally made it to the masses in some form, there seems to be a glaring lack of context. Since the game’s 2006 announcement, we’ve seen three Elder Scrolls games, two Fallout games, the rejuvenation of the once dead Persona series of Japanese RPGs, and two Witcher games – with a third coming in May.

Meanwhile, barring Square Enix’s output on mobile and portable devices, we’ve seen three lacklustre Final Fantasy XIII games, and Final Fantasy XIV, which is an MMORPG (Massively Multiplayer Online RPG). Other developers have been picking up the slack where Square Enix has been absent.

FFXV still has no release date. Hopefully the development team won’t take another 10 years to make this see the light of day. The demo however makes us think of Duke Nukem Forever; another game that lingered in development for an eternity, only for its eventual release to be an utter disappointment.