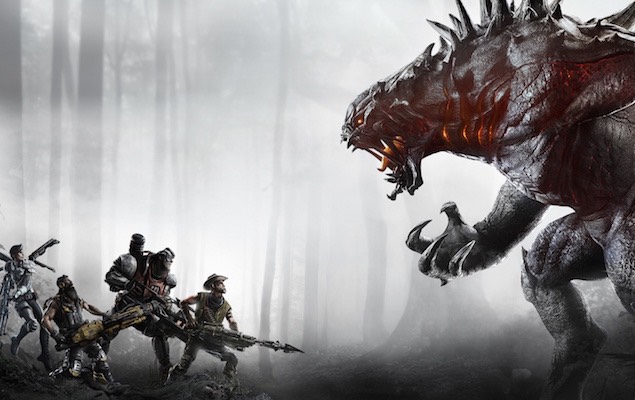 Evolve – recently launched for the Xbox One, PlayStation 4, and PC – puts you in the claws of a giant bloodthirsty alien monster, or the boots of four hunters that are trying to take it down. The multiplayer game makes you kill or be killed, whether you’re playing as one of the four hunters or the monster. Each of these five roles can be filled by either a human player or the computer AI (works offline), and the asymmetrical multiplayer of Evolve is one of its most interesting aspects.

Usually most multiplayer games have you in teams of equal numbers squaring off against each other in a duel to the death, or employ an each man for himself philosophy. Evolve, on the other hand focuses on teamwork for the four human players, and lets the monster player act like a lone wolf. The greater emphasis on cooperative play over individual glory can be seen evolving as franchises such as Pay Day and Left 4 Dead (which was incidentally made by Turtle Rock, the studio behind Evolve) gain prominence. Evolve marks the next step in this direction.

The game sport a slick sci-fi aesthetic and creative monster designs. All the action takes place on the distant planet of Shear, in a universe where man is attempting to colonise the far reaches of space. It’s a sprawling landscape replete with lush (and hostile) wildlife, peppered with the odd colony or power plant.

After the game’s tutorial that does a solid job of explaining its basic mechanics, you’ll be asked what your preferences are in terms of class types or being the monster. Much like Team Fortress 2, there are a host of character classes to choose from. They’re divided into support, assault, medic and tracker varieties. While the first three are self-explanatory, the tracker class plays a crucial role in hunting down the monster and laying traps to slow it down.

All the characters have a role to play in Evolve’s five match modes. You’ll go from rescuing colonists, to defending a star ship, destroying monster eggs, or simply hunting down a monster in the different modes. The fifth game mode – Evacuation – is the most intense of the bunch, combining the game’s four standalone modes into one gigantic battle royale.

Here, winning a round grants you specific advantages, for example: saving a power plant as Hunters allows you automated turrets in the next match while destroying it as a monster makes the environment in the next match poisonous for hunters. The procedural nature of events allow for unique outcomes and possibilities that make Evolve deceptively deep.

Regardless of the objective, the basic flow is the same. As a match progresses, the monster feeds on natural wildlife and tries to evade detection, levelling up and gaining access to new skills. Meanwhile, the hunters try to pinpoint its location, set traps and do whatever is necessary to find it. When the monster hits stage three of evolution, it becomes a powerful beast capable of total carnage, making the seemingly unfair four versus one split in its favour. From spewing fire to throwing rocks, there are a ton of skills at its disposal, as well as a more than generous health and armour that make the battle surprisingly fun.

It’s not all one-sided though. Hunters have some tricks up their sleeves. Their arsenal ranges from guns that fire lightning to orbital strikes on demand – not the freshest weapons, but a lot of fun to use nonetheless.

Within each of the four hunter classes are three characters you can play as, each with their own unique style. Take medics for example – the starter character is Val – who can heal one team mate at a time with a medigun, quite similar to Team Fortress 2’s medic. Play long enough and you’ll unlock Lazarus, who as the name implies, can raise the dead. The Lazarus Device brings your squad back from the dead, effectively making it twice as hard for the monster to destroy you.

The sheer variety on display when available makes Evolve a treat to play. And the same applies to the monsters. You start off as the Goliath, a Godzilla-esque being with melee based abilities. As you play you unlock others such as the Kraken who deals long range electrical damage and the Wraith who can create decoys and cloak itself.

However don’t expect to have all the classes and monsters available out of the box. To start with only the basic hunters and monster (the Goliath) can be used. As you keep playing, you’ll unlock more advanced hunters and monsters. It’s an interesting system that rewards the most diligent of players. Unlocking everything took us around three to four days but will vary depending on your skills and amount of time you put into the game.

More often than not it felt like a grind, an unnecessary requirement before the game’s full potential could be unleashed. Reason being, in terms of teamwork and co-operative play, Evolve is a completely different beast the moment each character class and monster is readily available. Thankfully you can play offline with bots and gain the necessary experience points to unlock everything. There are no in-app purchases to hasten it either, which is commendable given that other games in the same price range such as Battlefield 3 have succumbed to doing so. However, we have to wonder if such a system was a necessity to begin with.

Odd progression system aside, the second to second gameplay of Evolve is rather good. Playing as a hunter, the gunplay works well enough. Each weapon and ability has a distinct use that’s easy to master thanks to the clearly-detailed controls. You won’t be cycling through a host of guns here; the tap of a button brings up what you need. Each skill or weapon you need is mapped to the face button on the controller, making switching easy.

Furthermore, manoeuvrability across the game’s many maps is managed with the help of a jetpack that allows you to elevate to higher ground and provides a burst of speed to dodge some of the game’s more nasty hazards. Yes, as a hunter you’ll be dealing with more than just monsters. There are man-eating plants and water beasts called Tyrants to contend with as well. In bigger levels, there are minion monsters to fight off too. All of these elements add an amount of variance that makes Evolve’s matches anything but sterile.

Aside from the all but obvious graphical leap that this generation of gaming hardware grants us, it’s nice to see fresh ideas in terms of gameplay. Evolve and last year’s Titanfall are two examples of such originality. While it took the latter a while to get into its stride, it’s nice to see Turtle Rock hit the ground running with a surprisingly competent shooter. All of its elements such as the various class options, environmental hazards, and a slew of monster skills come together to make Evolve a frantic, fast-paced game whose appeal is hard to shake off. Barring the quirky progression system that betrays its depth, there’s very little else that’s wrong. If you’re burnt out playing modern day first-person multiplayer shooters, you may want to evolve to better things.

We played a retail copy of Evolve on the PlayStation 4. It is available on the Xbox One and PC as well, retailing for Rs. 3,499 on consoles and Rs. 999 on PC