While the market is flooded with 7-inch tablets, there’s still some space for good quality 10-inchers. The Zync Quad 9.7 tablet promises to bring a high resolution ‘Retina’ display to the Android world at an unbelievable price. But does it deliver on performance and usability? We try to find out.

Design/ Build
From the front, the Zync Quad 9.7 looks roughly similar to the Apple iPad except that there’s no hardware button. The front features a 9.7-inch screen surrounded by a black bezel. Interestingly, the iPad also features a 9.7-inch screen. The placement of the front facing camera is a little unconventional – it’s located at the top right corner (looking at the tablet in landscape mode).
The tablet has rounded corners and there’s a white plastic frame between the front and the back of the tablet. The back of the tablet has a brushed aluminium finish and while we’re not sure of the material that it’s made of, it does exude a feeling of durability. The tablet is solidly built and there are no creaks if you exert pressure. 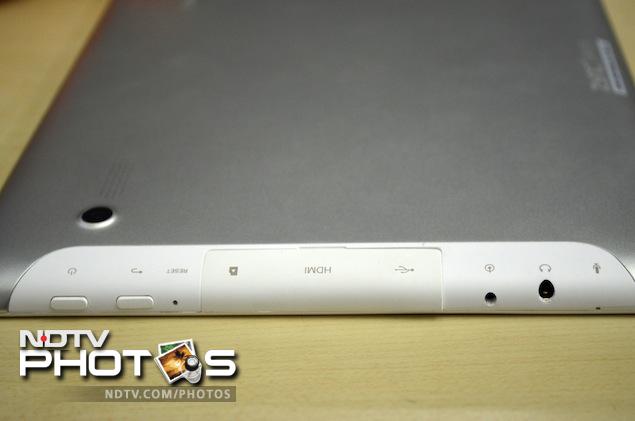 Holding the tablet in landscape mode, you’ll notice that there are two white plastic strips on both sides. The right side (looking at the tablet from the front) features a power/ screen lock and a back button, a flap that hides the microSD card slot, HDMI port and micro-USB port, and the 2.5mm charging port and 3.5mm headset jack port, in addition to a microphone. The flap is held by a flimsy piece of plastic and is a little cumbersome to close.
There are no ports or buttons on any other side.
The rear camera lens is located at the top left (looking at the back horizontally) along with a speaker outlet. There’s minimal Zync branding at the bottom.
Overall, the hardware appears to be durable and is tastefully done except for the flap that hides some ports.

Display
The 9.7-inch Super HD IPS display is the major USP of this tablet. Zync had touted the display of the tablet to be at par with that of the Retina display iPad. At 2048×1536 pixels the display packs 264 pixels per inch, making text and images appear super sharp. The screen is bright and vivid and although we found that it’s reflective to some extent, visibility under sunlight was not bad.
The display has an IPS panel that facilitates wider viewing angles, which essentially means that more than one person can view content playing on the screen properly, even from different angles. We found that this holds true in the case of the Zync Quad 9.7 tablet, and we were able to view media playing on the screen from different angles. However, the touch sensitivity is average. We’re not sure if it has to do with the screen digitiser or with the overall hardware performance.

Software/ Interface
The Zync Quad 9.7 tablet runs Android 4.1.1 – Jelly Bean, the latest iteration of the operating system, and doesn’t include any custom skin. However, the UI has been customised a bit to include soft keys for controlling volume levels and for taking a screenshot. Unlike the Nexus 7, which is Google’s flagship Android tablet, the tablet’s onscreen controls are on the bottom left instead of the centre, and the notification panel and quick access settings (for Wi-Fi, Screen rotation, brightness, sound and shortcut to settings) are located at the bottom right. 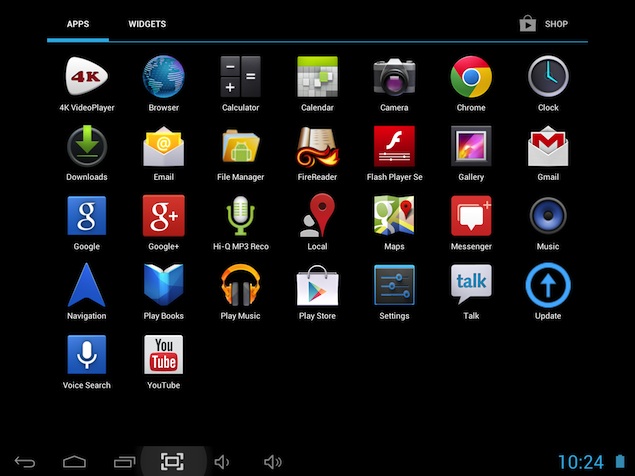 The interface is close to the stock build of the OS bundled with a few third party apps including 4K Video Player, a file manager app, FireReader- a document viewer, and Hi-Q MP3 voice recorder. The company has also included a utility for updating the operating system of the tablet. We like the fact that there’s no bloatware.
Although Jelly Bean delivered a smoother experience compared to Ice Cream Sandwich, we felt that this tablet was unfortunately, an exception to the case. We noticed some lag while navigating through the menus, opening apps and browsing the web, during our use of the tablet.
The major feature that Jelly Bean brings is ‘Google Now’, a voice based information assistant and an extension of Google search. You can ask questions and the tool returns answers or search results. It uses ‘cards’ which are essentially small boxes that offer different sets of information ranging from weather forecast, directions, traffic information, scores, appointments, and currency conversion, among others. Google Now collects information based on the user’s behavior, location and even e-mail to offer information, automatically.
We’re not sure if the tablet will get updated to Jelly Bean 4.2, but if it does, features like multi-user accounts (different profiles and access for different users) and lock-screen widgets would also come to the tablet.

Camera
The Zync Quad 9.7 comes with a 5-megapixel rear camera and a 2-megapixel front facing camera. We found that the pictures taken with the rear camera were above average when taken in daylight but had a little noise when taken indoors in fluorescent light. 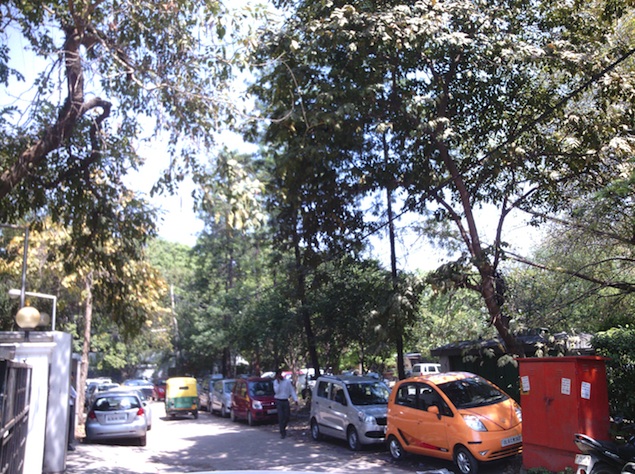 The rear camera also features auto-focus. Though we’re not sure if someone will use the tablet as dedicated devices for clicking pictures, we found that it’s pretty good for casual clicks. We found the front camera to be pretty good. It does a decent job when used for making video calls or for taking your own photos.

Performance/ Battery Life
A 1.5 GHz quad-core processor, an eight core GPU and 2 GB of RAM power the tablet. For a tablet that packs in so much in terms of hardware, we found the performance on the Zync Quad 9.7 a little underwhelming. As we mentioned earlier, we noticed some lag while navigating through menus as well as while browsing the web and using apps. We also encountered some app crashes while working on this tablet. Also, the tablet failed to render the app menu at certain times. Perhaps the high-resolution screen is to be blamed for this as it might be eating up resources. 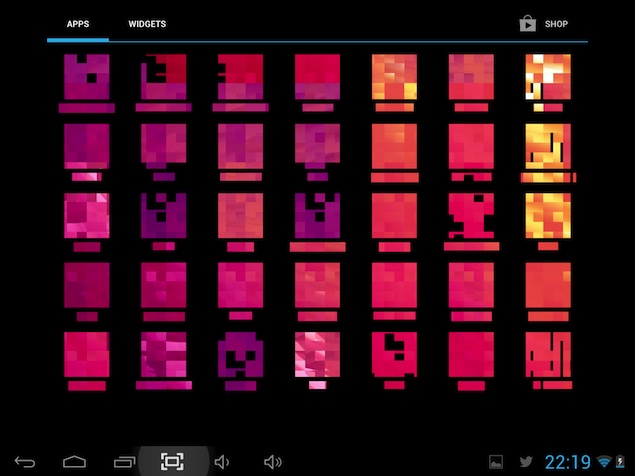 Another major problem with the tablet is that it gets heated up after a few minutes of video playback, and it becomes difficult to hold the tablet. Heat dissipation could have been tackled in a better manner.
The tablet comes with the native Android browser and Chrome, and renders all webpages well. Adobe Flash is pre-installed allowing the browser to display Flash videos, banners and other elements. The speakers on the tablet deliver good quality sound at even high volume levels.
There’s no voice calling but the major omission again is Bluetooth connectivity. We’re not sure why Zync had to exclude it since all major Android devices offer this feature and consumers might use it for wireless file transfers or for connecting a wireless input device. However, we see a lot of budget tablets these days ship without Bluetooth and we’re not convinced it’s a good trend.
The tablet comes with an 8000mAh battery and we were satisfied with the backup that it offered. We were able to get around 6 hours of video playback, even with the display on full brightness levels. The standby time with push notifications and e-mails on was also decent. With intermediate usage during the day, we were able to get 1-1.5 days of backup. The tablet would easily give 7-8 hours of usage on a single charge. A major pain point is the 2.5mm charging port due to which you need to carry the tablet’s custom charger along, which is a bit inconvenient.

Verdict
The Zync Quad 9.7 aspires to be the poor man’s iPad with the ‘Retina’ like display. It’s built well but unfortunately even with top-end specifications, the tablet doesn’t perform that well when it comes to practical usage. We’re also not sure if you’ll find many Android apps that are optimised for high-resolution displays although the tablet does allow you to tinker display settings to make standard apps look good. 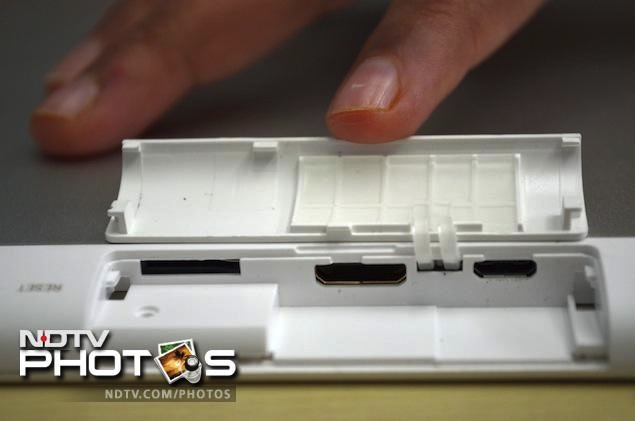 At Rs. 13,990, the tablet is priced decently but we’d recommend the Spice Stellar Pad if you’re in the market for a 10-inch tablet which costs around a Rs.1000 less and runs Jelly Bean.
If you’re only looking for a tablet that sports a high-resolution display, we’d suggest you go for the iPad. Unfortunately, the Nexus 10, which is Google’s flagship 10-inch Android tablet and sports a 2560×1600 pixel display, isn’t yet available in India. With the Nexus 7 being introduced a few days back, there’s some hope now!