Samsung is probably trying to apply its smartphones strategy on tablets, as the company is launching Android tablets of varied specification in the Indian market. Starting from 7-inch, the Korean manufacture has a tablet for you in almost every possible size – 7.7-inch, 8.9-inch, and 10.1-inch.

The recently launched Galaxy Tab 2 310 is company’s first Ice Cream Sandwich tablet to reach India and it is also a device that marks a big shift in company’s target market. Instead of going after the iPad buyers, Samsung has realised that it is better to target buyers that don’t have the budget to opt for iPad and can compromise a bit on features.

The Samsung Galaxy Tab 2 310 comes at almost half the price at which original Galaxy Tab was launched in India and has similar features, but has the reduction in price impacted the overall performance of the device? We find out in this review.

Apart from the original 7-inch Galaxy Tab, all the Samsung tablets look identical, with just a few aesthetic differences, but that in itself is not essentially a bad thing. The new Galaxy 2 310 looks nice and fits firmly in hand.

The tablet back is made of matte plastic and is resistant to fingerprints unlike the front, which just loves them.

The tablet comes with microSD card and regular SIM card slot on the left, while volume rocker and power button are present on the right. The illustration on the SIM slot is, strangely, not indicative of the way the SIM is supposed to be inserted – we wasted quite a bit of time with that!

Overall, Tab 2 310 has been put together very well and the sturdy build is certainly a positive for it.

In order to reduce the pricing of Tab 2, Samsung has opted for 1024x600p PLS display instead of much fancier AMOLED displays. PLS display are said to be brighter than normal LCD and offer better viewing angles, which is true for Tab 2 310 apart from the glare, but make no mistake – it is just your average display.

If you have seen the Retina display on the new iPad or even the Super AMOLED Plus on Galaxy Tab 680, you won’t be too happy with PLS on the P3100. The whites are a little yellowish and blacks are also on the grey side.

The touchscreen on the tablet is also prone to smudges and fingerprints.

The handset-makers have have been slow in bringing Android 4.0 smartphones in India but for tablets it has been a totally different story. Manufacturers ranging from Micromax to Zync to Milagrow, all have released multiple ICS tablets in the country. In that respect, Samsung is actually quite late in releasing its ICS tablet, while the relatively unknown makers have flooded the market with their latest ICS offerings.

Coming back to Samsung Galaxy Tab 2 310, this tablet runs on Android 4.0.3 with Touchwiz UX on top. Similar to what we have seen on the smartphone, Ice Cream Sandwich is also a big improvement over Honeycomb on tablets.

The whole experience of using the ICS is pleasant and there is no lag, but surprisingly we saw a lot of shutter on the home-screen.

Another positive of having ICS on the device is the ability to install Chrome browser, which has just come out of beta and certainly is a must-have for every user.

One of the major issues that keep plaguing every Android tablet is the lack of optimised apps, and the story is same with Galaxy Tab 2 310. The number of tablet optimised apps is increasing but it is still quite low when compared to iOS.

On the pre-installed apps front, Samsung has included its own set of mini-apps (such as alarm, calculator, e-mail, music player, etc.) that do not take full screen space and can be overlaid on any running apps.

These mini-apps are very useful at times and can be opened from anywhere on the tablet by simply tapping on the arrow present on the bottom panel.

Samsung has included a 3MP rear camera and VGA front camera on Tab 2 310. While, you won’t be using this tablet as your primary imaging device, but still the rear camera leaves a lot to be desired. The quality of images is average and as there is no flash, you will hardly be able to take any decent shots in low-light conditions.

The front camera is usable and you won’t have any issues video chats on the tablet. 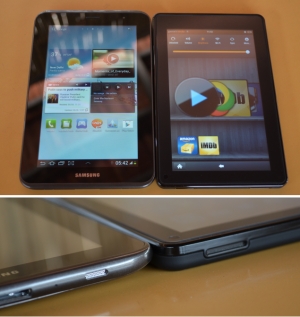 The Galaxy Tab 2 comes with 1GHz TI OMAP dual-core processor with 1GB of RAM, which is more than enough to give decent performance and it succeeds in that. Apart from the occasional hiccups and shutters, the tablet is pretty smooth.

Tab 2 310 also comes with 3G connectivity with voice calling support and it works as anticipated. You can make voice calls, sent text messages and get 3G data, when you have no Wi-Fi access. In a country like India, where you don’t find Wi-Fi hotspot that commonly, having 3G on the tablet is certainly a big value addition.

The game playback is decent and games like Temple Run, BackStab, Asphalt 6 and Shadowgun worked perfectly.

The Wi-Fi and Bluetooth work just fine, however the Wi-Fi range is less than other tablets in the market.

The tablet comes with 4000 mAh battery, which is same as found in Galaxy Tab 620, and you will get almost two days of battery backup on regular use. However, if you are a 3G network hog, don’t expect it to last more than a day on heavy use.

Samsung has released a very potent tablet in the form of Galaxy Tab 2 310. At the maximum retail price of Rs. 23,250 (street price is lower), it certainly has quite a few aces up its sleeve like 3G connectivity, voice calling, and Ice Cream Sandwich. However, the app (reparações de telemóveis in Portuguese) problem is still present and if you want more app choice, bigger display and have no love for 3G, iPad 2 is still a great buy at INR 24,500.