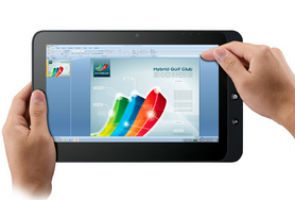 Viewsonic’s new tablet has a unique solution for consumers who are still clinging to Microsoft’s Windows, even as Google’s Android operating system gains traction: It offers both.
The ViewPad 10 is a dual-boot unit. It can launch either Windows 7 or Android as you start the computer.

Out of the box, the specs are impressive. The ViewPad has a 10.1-inch display, which is larger than the iPad’s 9.7 inches. It weighs less than two pounds, has built in Wi-Fi and Bluetooth and is stuffed with a relatively fast Intel 1.66 GHz processor. It costs $599 for the 16-gigabyte version, and $679 for double the memory.
The ViewPad has a built-in camera. The resolution is just 1.3 megapixels, well short of what the iPhone and other smartphones offer. So, don’t expect great images.
The device also features a mini VGA port, a standard audio jack, two USB ports and a MicroSD card slot. It’s pretty full-featured for a tablet.
The computer comes with Windows 7 Home Premium installed, and I updated the test unit with version 2.2 of Android, also known as Froyo.
I spent some time with Android first, as I was already familiar with that environment as an owner of an Android-powered phone from HTC. The ViewPad didn’t present as rich an experience as the phone, primarily because the graphical interface that presents the shortcuts, widgets and navigation on the tablet isn’t as advanced as those on smartphones. HTC’s smooth “Sense” environment for phones, for example, is among the best-of-breed for presenting the Android tools and apps.

Moreover, the apps shortcut on the tablet didn’t present the full offering of apps available on Google’s Android Market. Instead, it took me to a much smaller selection at something called “AndAppStore.” A direct link to the full slate of those Market apps would have been better, but the device appears to be hamstrung.
Google does not allow the Android Market to be pre-installed on Android 2.2 tablets with screen sizes larger than seven inches. And Viewsonic has no current plans to update the ViewPad beyond that version of the operating system. So there’s an impasse that leaves the ViewPad wanting.
You could try to install a more recent version of Android, such as Honeycomb, on your own. But it requires advanced technological skills, and there’s no guarantee from the manufacturer or Google that the ViewPad will perform well.
Once apps are launched, they work as expected. They’re quick to start up and easy to use. But most apps for Android are designed for a smaller display, not something as large as the ViewPad. The 10.1-inch display size, in most cases for me, was wasted on the Android side of this dual-boot device.

The better half of the ViewPad is Windows 7.
It ran fast and was pretty intuitive about responding to the right icons, scroll bars and objects on the display that I was trying to touch. It was a new experience for me to navigate the Web in Firefox by swiping across the screen. It fared well – better than surfing for content on the Android side.
When it came to more intricate programs, interacting with the tablet was challenging.
You could try to edit photos with Adobe Photoshop for Windows, but you’d be making the task much harder than it would be in a traditional mouse and cursor environment. Trust me, I tried.
Every erroneous tap propelled me into a wrong window or menu that had to be backed out of and started over. The first thing that came to my mind was to undo an action with “CTRL+Z”, but the keyboard wasn’t there unless I swiped it onto the screen from its little hidden perch in a corner of the display.

I’ll leave Photoshop, and a few other detail oriented tasks, for traditional computers with real keyboards. Tablets, at this stage, are better for content consumption than content creation.
Despite my success with a variety of Windows experiences (movie watching, Gawker reading, Flickr photo browsing and Facebook time-crushing) the tablet experience begs for apps. Better apps. Finger-friendly apps.
Browsers work to deliver this content, but full-fledged apps brewed up especially for human digits work better. They’re designed with bigger touchable regions and fewer (if any) tiny scrolling controllers.
It’s swell of Microsoft to make Windows 7 touch-friendly, but the company needs to fashion a tablet-specific version of its operating system to compete with Android and iOS.
Is dual-boot for the tablet worth it? Not really at this point. Android is best left to phones. But with a few improvements or perhaps a dedicated tablet operating system, Windows will fit in quite nicely in this growing computer segment.