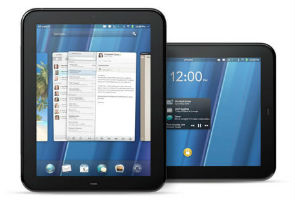 A year after Hewlett-Packard Co. purchased flailing Palm, the technology behemoth is rolling out the first tablet that uses Palm’s webOS operating system.

The July 1 release should be a triumph for HP, showcasing its ability to compete in the increasingly crowded tablet market. Yet while the TouchPad’s software is beautiful and intuitive, overall the tablet is more of a “meh-sterpiece” than a masterpiece.
The TouchPad looks a lot like its peers: It’s black and shiny with just a few buttons dotting its frame. The screen, 9.7 inches at the diagonal, is the same size and resolution as Apple’s iPad.
At $500 for a model with 16 gigabytes of storage or $600 for one with 32 GB, the price is essentially the same, too. The device I tested used Wi-Fi to connect to the Internet; HP says a version will work on AT&T Inc.’s wireless network later this summer.

At 0.54 inches thick, the TouchPad is fatter than the iPad. It’s heavier, too, at 1.6 pounds. With its rounded edges and smooth plastic, it’s also more slippery than other tablets I’ve tested.
Turn it on, and the TouchPad looks like webOS smartphones. Thesoftware makes perfect sense on a tablet. For example: Applications appear onscreen as little “cards” that you can scroll through sideways, tap on to enlarge or flick to close. Each window you open within an application – numerous Web pages or in-progress emails, for example – shows up as its owncard in a small stack for that app, and you can rearrange them as you please.
The TouchPad has the latest version of webOS, which adds features like the ability to pull your photos from Facebook and online photo sites into the device’s photo library, and “Touch to Share,” which will let you share content with certain webOS smartphones.
Generally, webOS made navigating a breeze. Its layout keeps the TouchPad’s home screen uncluttered, with the “Just type…” universal search function taking up a small amount of space in the center of the display and a strip of applications on the bottom of the screen.
I figured that the TouchPad’s screen would be great for watching videos. I wasn’t disappointed. Whether I was streaming Lady Gaga’s latest video oeuvre from YouTube or checking out the old Mike Myers comedy “So I Married an Axe Murderer” on Crackle, colors popped and images were crystal-clear.

The TouchPad was also good for surfing the Web, in part because it supports Flash video content, which the iPad does not. It couldn’t do everything. Here and there, a website didn’t look quite right, and TV and movie streaming site Hulu would not work on it. Overall, however, websites loaded and functioned as they would on a standard computer.
The device includes a fine on-screen keyboard. I wouldn’t havewritten up this review on it, but it was fine for sending emails and instant messages.
The TouchPad’s battery life was decent. After streaming videos, viewing photos and surfing the Web, the tablet lasted six and a half hours with Wi-Fi on. HP said it is rated for up to 8 hours of Internet use over WiFi, or 9 hours of video playback.

One of the TouchPad features HP touts is its ability to connect with a Pre 3 smartphone to share content like webpages and videos and receive texts sent to the phone on the tablet and reply to them from the TouchPad. Though the Pre 3 is not yet for sale (it’s slated for release this summer), HP lent me one to test this feature. The sharing was easy to set up via Bluetooth, and to pull up a website on the Pre all you have to do is touch its back near the bottom of the TouchPad’s screen.
Sure, it’s a cool idea, but I’m skeptical the feature would really get much use.
Of course, there were plenty of fumbles. Several times, I was in the middle of an IM conversation when the virtual keyboard mysteriously stopped allowing me to send text. I could type, but whenever I pressed “enter,” nothing happened. I had to restart the device to fix it.
The TouchPad also seemed to stutter sometimes, like when I flipped through on-screen album covers while running other apps. And when I streamed TV shows from network websites, they would sometimes freeze. Once an incoming message notification somehow turned off the sound and I couldn’t turn it back on.

The video chat feature, which I’d hoped would contend with theiPad’s FaceTime, was dismal. The TouchPad has a video camera on its front and uses Skype for video calls, so I asked my colleague Peter to help me give it a whirl. But when we tried to connect, he looked pixelated and sounded OK on my end and he said I looked “like a Monet painting” and sounded crackly on his.
I tried video chatting with a high school buddy but every time we got the video to work the audio was muted. I also attempted to talk with mylittle brother, and after four or five misfires we got the video chat working but the picture and sound were awful.

Like any other tablet that wants a chance of survival, the TouchPad includes access to an application store. HP said its App Catalog will have at least 300 TouchPad apps at launch, and 70 percent of its 6,200 webOS phone apps will work on the device. Still, this is slim pickings compared to the 90,000 iPad apps in Apple’s App Store (there are hundreds of thousands of apps total). And tablets running Google Inc.’s Android software can run any of the more than 200,000 apps in the Android Market.
Sadly, the TouchPad is more blah than brilliant. The software is great, though, so I’m keeping my fingers crossed that HP can come up with a stronger tablet next time around.