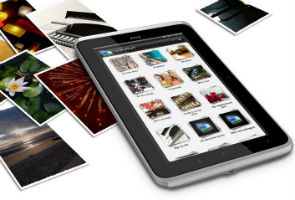 Is it better to have loved and lost, than to have never loved at all? That’s the question posed by a new tablet computer that takes aim at one of the deficiencies of the iPad: that it’s difficult to write on it with a stylus or pen.
The HTC Flyer is a $500 tablet with a 7-inch screen. At a glance, it’s not much different from the other tablets that are scrambling to compete with Apple Inc.’s iPad.
The iPad and all its copycats are designed to sense the touch of a finger. The screen layer that does this looks for big, blunt, electrically conductive objects such as fingers. It doesn’t sense small, sharp ones like pens.

That’s why third-party styluses for the iPad are blunt rubbery sticks. They’re essentially imitation fingers. They’re not very good for drawing, but some people find them better than nothing.
The Flyer has the same finger-sensing screen layer. But it backs this up with a second one, which looks for the movement of a specially designed, battery-powered pen.
The pen moves fluidly over the screen, with a relatively sharp (but non-scratchy) point. The pen even senses how hard it’s being pressed on the screen. The tablet responds by making the line thicker or thinner.
The pen makes the Flyer a great notepad and a decent sketchpad — at least one that’s better than the iPad. The Flyer includes a note-taking application that’s compatible with the Evernote online storage service.

You can jot off a note and send it by email. The recipient will see your handwriting in an image attachment. You can also snap a picture with one of the Flyer’s two cameras and color over the image with the pen. In the e-book reading application, you can scribble notes in the margins and underline with the pen.
Unfortunately, the Flyer lacks the broad range of sketching and doodling apps that exist for the iPad. You can’t dispense with finger-typing on the on-screen keyboard because the tablet doesn’t understand what you’re writing. Because no other tablets work with this type of pen, only apps from manufacturer HTC Corp. are compatible.

The other sad thing about the Flyer is that HTC has chosen to treat the pen as an optional accessory. For the $500 you plunk down at Best Buy — the same price as the larger, more capable entry-level iPad — you don’t get the pen. It’s $80 extra. Yet it’s a mystery why anyone would buy a Flyer without it.
Worse, HTC makes zero effort at keeping pen and owner united. There is no slot on the tablet to hold the pen when not in use. There’s no case for the Flyer that will hold the pen. The pen doesn’t even have a little loop that would let you tie it to the tablet or something else that won’t get lost.
In two weeks of use, I dropped the pen a dozen times. I’m proud that I managed not to lose it, but I doubt I could go another two weeks. I would then have the privilege of buying a replacement for $80, a price for which I could get about 300 Bic pens.
In that context, “never to have loved at all” looks like the cheaper option. Paper pads and ballpoint pens, too.

Sprint Nextel Corp. will sell a version of the Flyer it will call EVO View 4G, starting June 24. It will have 32 gigabytes of memory, double the storage in Best Buy’s version, and it will have access to Sprint’s data network. In a smart move, Sprint is including the pen, but only “for a limited time.” However, buyers will need to sign up for two years of wireless data service from Sprint, so the final price will be considerably higher.
Some other things to consider: The Flyer runs Google Inc.’s Android 2.3 software, which in plain English means that it uses the same software as a lot of smartphones, but not other recent iPad rivals. They use a more recent package, “Honeycomb,” that’s designed for tablets. HTC promises to upgrade the Flyer’s software to Honeycomb soon, helping it stay compatible with tablet-specific apps.
In my video-playing test, I got 7.5 hours of play time out of the Flyer, which isn’t very good for a tablet. The iPad 2 gets ten hours; the Asus Eee Pad Transformer gets nine.
The Transformer is a better example of a tablet that tries to compete with the iPad by doing something new — in that case, by doubling as a small, elegant laptop thanks to a clever accessory keyboard.

The pen-sensing layer of the Flyer could be a great addition to the world of tablets, but someone really needs to figure out how to make the pen cheaper or easier to keep track of. To end on another corny quote, “If you love something, set it free; if it comes back it’s yours, if it doesn’t, it never was” is not a phrase to live by when it comes to $80 pens.