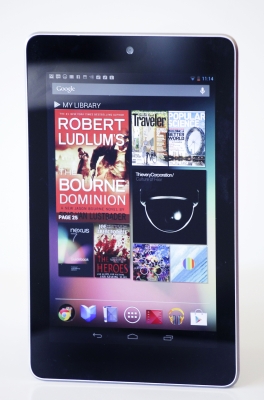 In the 1982 sci-fi movie “Blade Runner,” there are hints that the hero, played by Harrison Ford, is an artificial human – an “android” or “replicant.” His job is to go out and kill other, rogue androids.

If he’s an android, he’s of the latest model, Nexus 7. That’s also the name Google Inc. has picked for the first tablet to bear the Google brand. Clearly, its mission is to go out and kill rogue tablets running Google’s Android software.

Specifically, the Nexus 7 seems to have been designed to give anyone who bought a Kindle Fire from Amazon.com Inc. or a Nook Tablet from Barnes & Noble Inc. a lethal case of buyer’s remorse.

The Nexus 7 costs $199, the same that Amazon and Barnes & Noble charge for their tablets. But it’s better than theirs in significant ways, as it became clear to me after a couple of days of use. Google announced the tablet last week and is taking pre-orders for delivery in mid-July.

Why is Google targeting the Kindle Fire and the Nook Tablet? Because they’ve been relatively successful competitors to Apple Inc.’s iPad tablet, yet Google is getting no benefit from their success.

Google makes its Android operating software available for any device manufacturer to use. Amazon and Barnes & Noble took Android and modified it heavily. Namely, they took out the applications that point to Google’s services and the advertising it sells. Instead, the apps point to the companies’ own stores.

In other words, these tablets are rogue Androids. 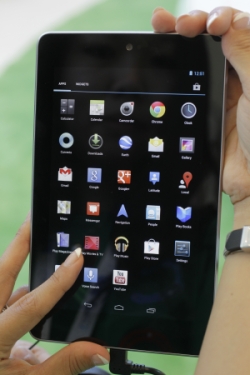 Other tablets, such as Samsung’s Galaxy, use the “proper,” Googlish version of Android, but they’ve been more expensive than the Kindle Fire and Nook Tablet. Apparently, Google thought it was time to make a really good, proper Android tablet for $199.

It’s succeeded. As far as I can tell from my few days of use so far, the Nexus 7 is a really good value. It’s made by AsusTek Computer, a Taiwanese company that was originally planning to sell a similar tablet for $249.

The Nexus 7 is a plain black slab with a screen that’s 7 inches on the diagonal – the same size as the Nook and the Fire. The most noticeable feature it has over the competition is a low-resolution camera, facing the user. That means the Nexus 7 can be used for videoconferencing, but it’s nearly impossible to use for snapshots. It also has a microphone, which the Fire lacks, making Amazon’s device useless even for audio conferencing.

The screen has a higher resolution than the Fire, and colors look more vivid. The whole tablet is slightly thinner and appreciably lighter than the Fire.

Other nifty but invisible hardware upgrades on the Nexus 7 include Bluetooth and GPS chips for use with headsets and navigation software. The tablet even has a chip for near-field communications, which means it can “talk” to some phones and store payment terminals when tapped against them. I used the Nexus 7 to pay for toilet paper in a drugstore.

But the most important difference between the Nexus 7 and its prey is the software. Not only is it running stock Android, but it’s also the first device to run the latest version of Android. Google, with its trademark combination of cute and cutthroat, calls it “Jelly Bean.” 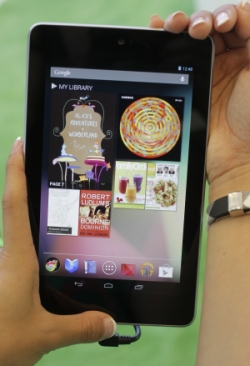 Stock Android gives Nexus 7 access to a much wider array of applications than its competitors, running into the hundreds of thousands. The diversity also applies to content: You can use a wider range of e-book stores and movie services on the Nexus 7. You can read Kindle books on the Nexus 7, for example, but you can’t read Google books on the Kindle.

Google does its best, though, to steer users to its “Play” store for apps, movies, music and books. Buyers even get a $25 credit toward store purchases, partly defraying the cost of the tablet itself.

With a powerful processing chip and plentiful RAM memory, the type available for running programs, the Nexus 7 is fast and slick. You can switch directly from application to application, something that isn’t possible with the Fire or Nook. They both force you to exit an application and go to the main menu before jumping into another one.

The chief issue buyers will likely bump into with the Nexus 7 is a lack of storage space. The $199 model has just 8 gigabytes of storage, and a quarter of that is overhead. It has just 5.9 gigabytes actually available. With downloads of a few applications, some songs and one movie, more than half was gone.

There’s a step-up model with 16 gigabytes of storage for $249, which I would highly recommend. There’s no option to expand storage with a memory card, a feature available with the Nook Tablet and many other Android tablets (but not the Kindle Fire, either).

Early buyers may also find that some applications will not work on it. Because Jelly Bean is the bleeding edge of Android, app developers haven’t had time to rewrite their products for it. I encountered this problem with a couple of applications, including a popular video player called MX Player.

Lastly, the size of the screen is going to frustrate some buyers – the ones who really wanted an iPad. The Nexus 7’s screen is a nice step from a smartphone screen, but the iPad is a really big step up. Magazines and full-page documents, for example, work great on the iPad screen, but are difficult to view on a 7-inch screen. The iPad also has the best selection and quality of third-party software.

In “Blade Runner,” one of the super-strong androids breaks two of the hero’s fingers, one by one. The Nexus 7 deserves a better reception.

It’s a great entry in the cheap-and-small tablet category, even if it’s not perfect. But then again, who is?