A world where mobile phones are getting bigger and tablets are getting smaller has seen the rise of a new category of devices. At first considered Frankensteins of the mobile computing world, phablets became cool with Samsung Galaxy Note’s success.
Recently, we’ve seen a bunch of new devices trying to make a mark by appealing to those looking for large screen devices, minus the stylus. We look at three such devices that attempt to woo the budget-conscious – the iBall Andi 5c, Micromax Superfone Canvas A100 and Spice Stellar Horizon Mi-500.

Build/ Design
The Micromax A100 is a clear winner in this department. The curves of the A100 fit well in hand, thanks, no doubt, to the slightly smaller profile compared to the other two devices. While none of the three devices scream “cheap plastic” (the Spice comes the closest), the overall finish of the Micromax ensures it stands out from the rest.
The Micromax A 100, like the iBall Andi, has the power button on the right, which makes it rather convenient to use for a large handset. We didn’t find the top placement of the power button on the Spice particularly handy, given the length of the device. The Spice handset has the volume rocker on the right, another odd choice, compared to the Micromax and the iBall Andi, which have it on the left. All three devices come with a Micro-USB port – the Micromax has it at the bottom, while the other two at the top, next to the audio jack. 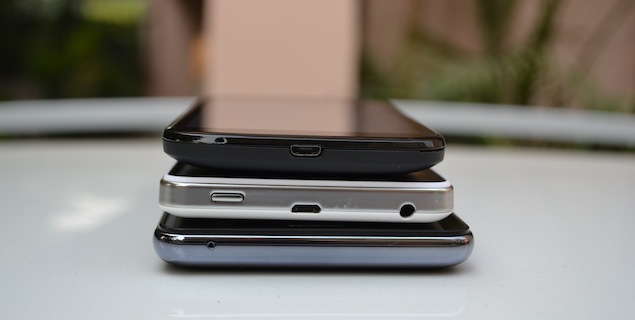 The iBall Andi is the only device that comes with a physical home button, flanked on either side by capacitive touch Menu and Back buttons. The Spice goes all capacitive touch with same button options, whereas the Micromax A100 goes the all-virtual route, with Back, Home and Recent Apps button appearing at the bottom of the screen at all times (except when you play full-screen video). Picking any one of the three based on style of buttons is down to personal preference.
At 168 grams the Micromax A100 is no featherweight, but comfortably lighter than its two competitors. Overall, it’s our pick in this section.
Winner: Micromax A100

Hardware/ Performance
The Spice Mi-500 packs a dual-core 1GHz processor that gives it a clear advantage over the other two phones that are powered by single-core processors. The benchmarks as well as day-to-day usage observations were in line with this fact.
While none of the phones suffer from any lag during typical operations, the Spice does a great job of handling everything thrown at it. Though all three phones ship with 512MB RAM, the Spice Mi-500 required fewer reloads of the page when going back to a tab while having multiple tabs open. The Spice is also faster at loading heavy web pages. The touch performance of all three phones is at par.
All three phones are dual-SIM standby, which of course means while you are making a call on one number, the other will appear unreachable.
Winner: Spice Stellar Horizon Mi-500

Display
The Spice and the iBall handsets feature identical 12.7-cms displays with WVGA resolution (480×800). Micromax chose to cram in a few more vertical pixels, going with a FWVGA 480×854 12.5-cm display, a resolution seen in some of the recent Xperia smartphones, amongst others.

As far as display quality and colour reproduction are concerned, the Micromax A100 fares the best. Images appear sharp and crisp (but not artificially so), and the viewing angles are pretty good. The iBall Andi display is next in line by doing an average job on all fronts. The Spice Mi-500 is let down badly by a poor display – the colours appear washed-up and viewing angles are extremely limited.
Winner: Micromax A100
Software
All three handsets come with pretty much stock Android 4.0 Ice Cream Sandwich, though Spice has applied a few tweaks of its own. Each handset comes with a few bundled apps as well, but nothing’s that likely to influence your buying decision one-way or the other.

Camera
All three phones come with identical 5-megapixel rear shooters with autofocus and LED flash but the performance is visibly different. While the Spice and the Micromax cameras do a pretty decent job, the iBall Andi camera is a disappointment.
The Spice beats the Micromax in colour reproduction and image quality outdoors, while the Micromax just about edges the Spice under low-light conditions (both with, and without flash).
However, there’s a flaw with the Micromax A100 camera. All images clicked with the phone in landscape mode appear upside down. Of course that’s easily fixable by rotating the images, but it’s a big annoyance no doubt – not everyone’s familiar with batch-editing tools for photographs, and we can imagine poor souls having to rotate each image manually. Thankfully, the bug is limited to images only, since videos appeared upright, no matter how the phone is held.
Strangely, Micromax refused to acknowledge the problem- even though there are multiple reports of this problem out there – and tried to pass it off as a “bug with ICS”!
Winner: Spice Stellar Horizon Mi-500

Battery
Big screen need big batteries, and all three phones deliver, with the smallest battery in the lot being the Micromax, that has a 2,000mAh one. However, it does a good job of keeping up with the Spice that has a 2,400mAh battery, and both the phones had pretty similar battery usage patterns in day-to-day tasks. The iBall Andi guzzled up its 2,300mAh battery faster than the other two.
Tie: Spice Stellar Horizon Mi-500 and Micromax A100

Verdict
If you’ve made it this far, it would be pretty clear that it’s between the Spice Stellar Horizon Mi-500 and the Micromax A100 for the overall winner. While the Spice performs better and has a slightly better camera, the Micromax is better looking; a more natural fit in the hand and has a better display. There’s nothing to choose between the two as far as the software and the battery life are concerned.
Let’s throw the prices into the mix. The Spice Stellar Horizon Mi-500 retails for Rs. 12,499 while the Micromax A100 is available for Rs. 9,799. So is it worth spending 2700 rupees extra to get a phone that offers a better multi-tasking experience but an average display? If you can afford it and find that the Spice handset snuggles into your hand, go for it.
If you prefer something that’s lighter on the pocket, as well as your hand, has a better display and don’t mind a little bit of a performance hit, pick up the Micromax A100. If you do, also get IrfanView for Windows or an Automator action on Mac to flip those inverted camera photographs in a batch – until Micromax wakes up and fixes the problem.