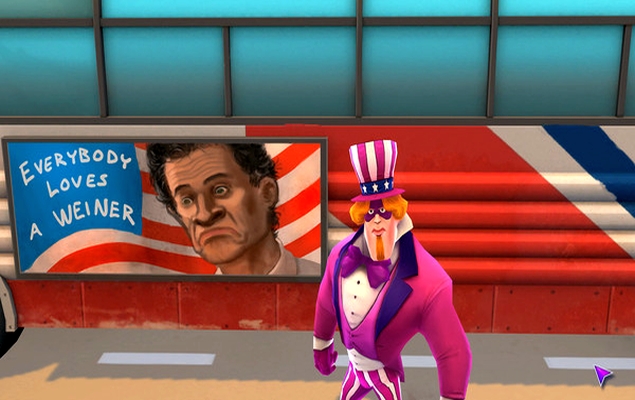 Over the last few years, games have started to fall into two main camps. One camp said that gameplay is everything – and then delivered a string of interchangeable monochrome first person shooters featuring protagonists of questionable morality and two mandatory plot twists. The other group camp insisted that games are a transcendental art form – and then delivered a string of morosely monochrome titles featuring a young protagonist who would overcome terrible odds and learn something about his/ her self and/ or relationships, usually while jumping over platforms against the backdrop of a moody soundtrack.

Of course, there are plenty of games that still fall outside these two camps, and the steady revival of puzzle adventure games in particular is something we're very excited about.

Supreme League of Patriots is one such game. Released by Phoenix Online Publishing, which also recently released the 20th Anniversary Edition of Gabriel Knight: Sins of the Fathers, it's bright and colourful, and packs in a lot of laughs, and the first episode, which won't take more than four hours to finish, is available for just $5.99 (approximately Rs. 370).

Funny as a barrel full of monkeys

Our hero Kyle Keever looks and talks a little bit like Mr Incredible from Pixar's The Incredibles. At the start of the game, you're auditioning for a role in a TV show – America's Got Superpowers. Real superpowers follow, and much of the action in the game is accompanied by tongue in cheek narration by Kyle's British sidekick Mel. 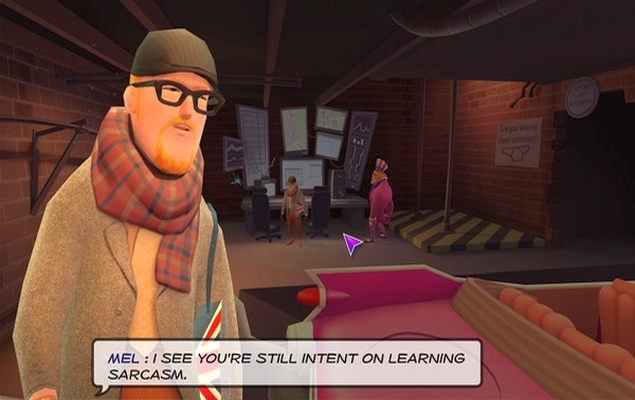 The blocky visuals look good and gel with the overall style the game's creators are going for. Kyle, Mel and the other characters you meet in the game are all over the top, as are the scenarios you keep finding yourselves in.

It starts off strong and Mel's one-liners in particular had us giggling. There are wry remarks that make fun of the genre conventions, many a double entendre, bad puns and toilet humour. There are digs at the game and at gamers and cosplay, which managed to be funny without getting tiresome. That's possibly because the episode is short, but it could also be that the genre lends itself to this kind of humour, unlike the forced cheer of Sunset Overdrive.

The dialogue delivery is quick-fire, and the humour is universal. There aren't too many in-jokes to follow; instead you'll be laughing at sight gags and visual puns. Comic pratfalls and visual gags filled up the relatively short episode. The different voice actors also help to keep the game feeling fresh as you meet and talk to different people and solve crazy puzzles. But what really sells the game is its fast and dry sense of humour. You can get a small sample of it in the trailer below:

Not quite ready for prime time

The game looks good, with bright colours and cheerful looking designs, but the animations were stiff and looked painfully artificial. The puzzles themselves feel nonsensical – you'll end up clicking every single thing you see in the vague hope that it might be important later. This is a problem that happens all too often with games of this type when the developers are trying to be funny with the clues.

Unfortunately, while these "clever" solutions are funny once you finally solve the puzzles, getting there is often not organic, and can be needlessly frustrating. Thankfully, the controls are fairly straightforward. Just move your mouse to point and click; you can click on objects to pick them up or use them, click on different dialogue choices which come in comic book style bubbles to guide the conversation, or just click to move around.

There's a little too much dialogue though, and you can click to skip some, but not all of it. This means that there are some conversations which leave you feeling like you're watching a cartoon, instead of living inside one. The pace of the game drags it down as much as the bad animation does, and the jokes can't really save the game after a point.

Despite its flaws, we still had fun with Supreme League of Patriots, but your enjoyment of the game will depend heavily on whether its sense of humour clicks for you or not. The trailer above does give a sense of the tone of the game, and if that doesn't instantly make you want more, then this game definitely isn't for you.

Supreme League of Patriots is available now for Windows, Mac and Linux users. You can purchase the game on Steam for $5.99, or buy the season pass for all three episodes for $14.99 (approximately Rs. 925) here.