A corner table of a local bar is hardly where you would expect to check out a brand new, unreleased video game, but that’s exactly what happened as we huddled around a laptop and played Sky Sutra. Created by Mumbai-based Yellow Monkey Studios, Sky Sutra has a heavy focus on couch co-op, and is coming to the PC and possibly, the PlayStation 4.

Yellow Monkey has already made a name for itself with high quality premium mobile games such as It’s Just a Thought, Huebrix, and most recently, Socioball. Sky Sutra is meant for a new audience, but the developers have made a polished game that makes good use of the controller. 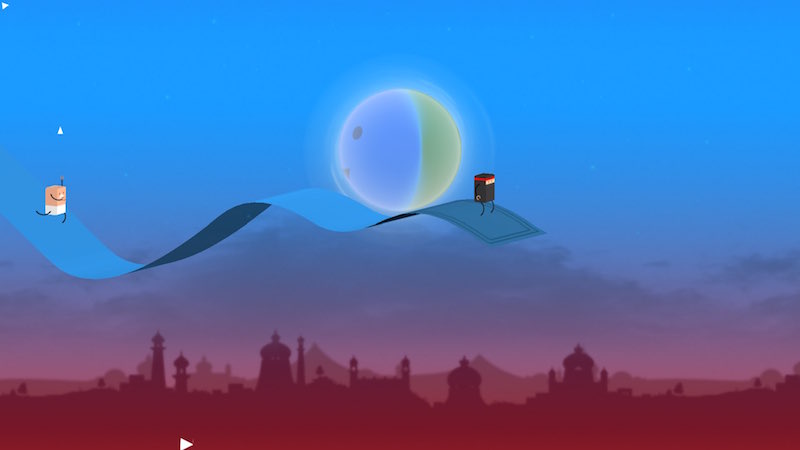 At first, we were skeptical, because Sky Sutra can easily be mistaken for many of the side-scrolling, endless runners we’re subject to on Android and iOS. There’s a cute looking art-style with colourful backdrops, two boxy characters, and a never-ending carpet suspended in the sky along which they run. Actually playing the game quickly showed how much more there is to this.

Armed with a gamepad, we found ourselves racing along – jostling for first place from the leader. With an endless supply of bullets and an intuitive aiming system we tried our best to gun down the leader to take first place.

The leader meanwhile is creating the carpet on the run – jumping makes gaps in the fabric, and the chaser will fall down through this if it’s not careful. When chasing, we had to aim with the left analog stick, shoot with the right trigger, while tapping the X button allowed us to jump and avoid gaps created by the leader.

The controls were easy to wrap our heads around and in a few moments we managed to take the lead thanks to a well-timed shot. As the leader, we could bob and weave to avoid being shot and to make the chaser keep falling. The leader can’t shoot back, but regular jumps will keep the chaser at bay, forcing it to jump to keep up and stay on course. It’s at this point that the game’s precise controls really shone. They allowed us to execute split-second jumps at will, watching with glee as the chaser fell out of the sky.

Before we knew it, managing roles of being a chaser or a leader became second nature and we got into the groove of running through endless skies with ease. What surprised us was that the sole indicator of winning a round was that the sky along with the sun and the moon would change colour akin to that of your character. Also of merit is the utter lack of notifiers, user interface, or messages making Sky Sutra a truly minimal affair, without complex scores or cluttered notifications on your screen. 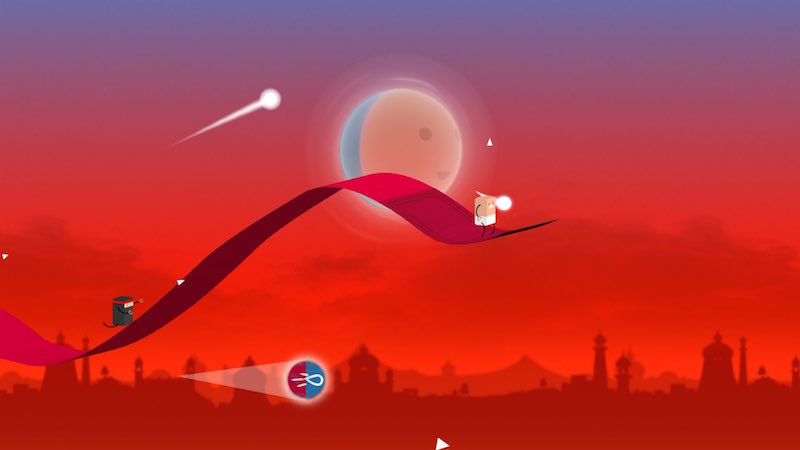 There’s an arcade-y, hypnotic vibe to it all, not too dissimilar to cult classics such as Dyad and Nidhogg, the latter having served as inspiration for Sky Sutra, according to Yellow Monkey boss Shailesh Prabhu, who was on hand to guide us through the game and play it with us.

By this time we noticed that the controller Prabhu was using was a Dual Shock 4. This begged the question, would the game be making it to the PlayStation 4? It’s something Prabhu says he hopes will happen in the near future, but there’s no guarantee at the moment.

Right now, it’s also playable at the Indie Shindig – a showcase of varied local and international video games in Trivandrum, something you should want to check out if you’re in the area. Although it’s early days, Sky Sutra is fantastically polished couch co-op experience that surpasses most games by Indian developers.